Archives - From Leeches to Lasik

From Leeches to Lasik 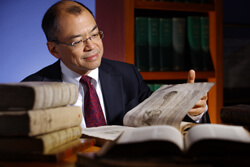 Richard Semba with a “literary treasure.”

Deep in a subbasement of the Wilmer-Woods Building is a small library that houses what Richard Semba calls “the most important specialty book collection of its kind in the world.” Semba, the W. Richard Green Professor of Ophthalmology at the Wilmer Eye Institute, is referring to the rare book collection of William Holland Wilmer, the founder and first director of the eponymous institute and a passionate bibliophile. Wilmer collected books  that traced the scientific discoveries leading to our modern-day understanding of vision and the treatment and prevention of eye diseases. In 1936, shortly before his death, he bequeathed his collection to the Institute.

“There are other collections of rare books on ophthalmology, but Wilmer’s is spectacular,” says Semba. In 1999, in an effort to share Wilmer’s literary treasure trove with the public, Semba—along with Kristine Smets, “one of the best rare-book catalogers in the world”—began curating the collection. The result of their labors, A Perfect Vision: Catalogue of the William Holland Wilmer Rare Book Collection, was published in July, and contains detailed, technical descriptions of each of the more than 400 texts in the collection.

The swath of topics covered by Wilmer’s collection and the stories behind them open up a world of behind-the-scenes Renaissance drama. For example, Christoph Scheiner, a Jesuit priest and astronomer, observed sunspots in 1611. His book on sunspots, Rosa Ursina sive Sol, published in 1630, greatly angered Galileo, who claimed he discovered sunspots. There are also books dedicated solely to the optic nerve, the making of eyeglasses, the beginnings of Braille, and the (correct) theory (by Johannes Kepler) that the retina—and not the lens—receives and transmits visual stimuli. There’s even a guide on how to make an appointment with a famous German ophthalmologist who treated patients for free.

The rarest book in the collection is a treatise on color, written by a Portuguese diplomat and published in Malta in 1787. “I was only able to locate two other copies; they’re in Portugal and they’re in very bad condition. Wilmer’s is in very fine condition,” says Semba, a bibliophile and book collector in his own right.

Importantly, Wilmer’s collection contains what’s known in the rare book world as “incunabula.” “Incunabula are books printed before the year 1501,” says Semba. “Wilmer had 13, which is incredible. If you have these, it’s like saying you own Old Master paintings.” The oldest book in Wilmer’s collection—an “incunabulum”—is Peter of Limoge’s De Oculi Morali, published prior to 1476, and a shining example of Johannes Gutenberg’s invention of movable type, invented about two decades prior.

“It’s really humbling to go through these books, because you realize that some of these books are by some of the greatest scientists that ever lived,” says Semba.  Erin Montgomery