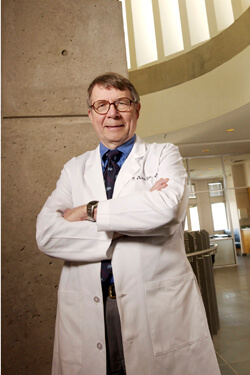 During a three-decade Hopkins career, O. Michael Colvin conducted landmark research on how high-dose chemotherapy works—as well as on its toxicity—that continues to have a fundamental impact on cancer therapeutics in general, and bone marrow transplantation specifically.

Because of Colvin’s pioneering investigations, the Hopkins cancer center became the site of the nation’s first cancer pharmacology program; and his work with such Hopkins colleagues as John Hilton, Richard Jones, and Saul Sharkis led to the development of a stem cell isolation probe that remains a commonly used marker for identifying stem cells.

Colvin, who began his Hopkins career as an intern in 1961, also served as associate dean for research from 1988 to 1990. He left in 1995 to become head of Duke University’s Comprehensive Cancer Center, which experienced significant growth during his seven-year tenure as its director. He retired in 2008 as a professor emeritus of medicine and died on March 16 at the age of 76.

As director for 20 years of what became Hopkins’ internationally famous Division of Pharmacology and Experimental Therapeutics, Colvin deciphered the mechanism of action of cyclophosphamide, one of the first and still one of the most commonly used anti-cancer drugs—indeed, the first rationally designed “targeted therapy” medication, long before that term was coined. Cyclophosphamide also remains one of the most important drugs in the treatment of autoimmune diseases and still is the most commonly used drug in bone marrow transplantation.

Co-editor of the journal Molecular Cancer Therapeutics, Colvin was a prolific investigator, publishing hundreds of articles in peer-reviewed journals, as well as book chapters and abstracts. He also held five patents based on his findings. A year after he stepped down as head of Duke’s cancer center, Colvin received the university’s 2003 R. Wayne Rundles, MD Award for excellence in cancer research.

Known as a compassionate advocate for all cancer patients, he and his wife of 53 years, the former Arline Macey Lockerbie, were honored in 2004 with a Light of Hope Award from the Duke Cancer Patient Support Program.  Neil A. Grauer