Archives - Catching Up with Ed Miller

Catching Up with Ed Miller 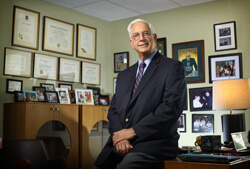 How often are you on campus these days and what does your work entail?

I’m usually here two days a week, and I do a lot by phone. Interestingly, I’m meeting with quite a few people who are looking for career advice. They are wondering, What should I do next in my career? And it’s not just the docs but administrators too, or lawyers, or people who might have some opportunities: Should I stay, should I go? What’s the advantage? All those nuts and bolts kinds of questions. They just want some help sizing up the opportunities.

What’s your involvement with the Armstrong Institute for Patient Safety and Quality?

I’m active on the board, and I’m also serving as honorary chair of the planning committee for the Forum on Emerging Topics in Patient Safety that we will host September 23–25. We’re bringing together leaders from health care and other industries around the country, as well as experts from the World Health Organization, NASA, and Consumer Reports’ Health Ratings Center to discuss the most important issues in patient safety today.

You’re also on the board of the Brain Science Institute. Any new developments there?

I attend many meetings lately where we are trying to put together a sustaining funding source for the Brain Science Institute. It’s important work.

When you “retired,” turned off the lights and went home, was that change immediate or did it take some time before you fully realized you were in charge of your own schedule again?

A lot of people gave me the advice not to take on too many responsibilities, so I didn’t. I sit on a total of four boards. That work comes in quarters so their agendas all occur at the same time of year. My work with the University of Virginia board consumed much more time than I expected. I’m on the board of visitors for the entire university. I’m also the chairman of the trustees that oversee the medical center, so I do weekly phone calls with them. I’m on the investment committee as well. UVA has a very large $5.4 billion endowment, considering it’s a public institution. The first members of their board of visitors included Thomas Jefferson, James Madison, and James Monroe, so it’s quite a legacy to live up to.

Are there unique challenges on the UVA board?

Yes, it’s emblematic of what higher education is going through these days. How can you continue to raise tuition year after year, two to three times the CPI? Is that a sustainable business model? Are we training the students for the right needs for the future? I did not vote for a tuition increase this year. A 1.8 percent increase, which was inflation, seemed reasonable, but I wouldn’t vote for a 3.9 percent increase. It does not make sense. If you continue to increase your revenue in this way, you will avoid facing hard choices.

I see undergraduate education exactly where medicine was 15 years ago. Up until then, we just kept raising prices. And now where are we? The hospital gets no increase this year. Medicare gets 1.8 percent and funding for Medicare will continue to decrease. The Accountable Care Act will continue to drive prices down so you can end up in a situation where instead of us going in the direction we should go, we’re being influenced by others to make some improper choices. The same thing will happen in undergraduate education to the kids in the middle. They can’t afford these huge tuitions.

Has anything from your earlier career in anesthesiology bubbled back to the surface?

I’m still active on the national level with the Foundation for Anesthesiology Education and Research. I received one of their early grants, as did Ron Miller who was the chief anesthesiologist at the University of California, San Francisco. Together, we were pretty instrumental in getting the American Society of Anesthesiologists to offer $1 million annually for small grants to fund young investigators. This has turned into a way for people to get their first grant. These are small grants—not an NIH-size grant. Just enough to get the hook in so people will be able to go and do other things. I think it’s important for the field.

If you could give President Obama one piece of advice on health care, what would that be?

Well, the thing he didn’t do that he might have done, should have done, but didn’t politically do, is to change Medicare from fee-for-service to population health.

Everything is keyed off of Medicare—everything. This includes reimbursements and regulations. The Blues follow what Medicare does; Medicaid follows Medicare. There are some pilot projects and we have some of those, but if you stay on fee-for-service you’re never going to get the costs under control and you’re not going to improve quality.   Interview by Michael Keating