Archives - Birthplace of a Breakthrough

Birthplace of a Breakthrough 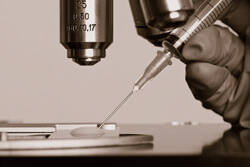 1 2 3 4
This criterion—the need to see the tail of a sperm in the cytoplasm—ended up being of great significance in the work that Bob Edwards would do at Hopkins.

Today, millions of individuals owe their arrival on Earth to clinical in vitro fertilization (IVF)—but few are aware of the pivotal role Johns Hopkins played in the initiation of this important medical advance nearly a half century ago.

I was there and participated in it. I’m happy now to provide the inside story of how Johns Hopkins became the birthplace of the breakthrough that ultimately led to what later became known popularly (but completely erroneously) as “test tube” babies.

The story begins in 1963, when a young British physiologist, Bob Edwards—who would become the Nobel Prize-winning Sir Robert Edwards—joined the Department of Physiology at Cambridge as a Ford Foundation research fellow. Bob would continue his association with that department until his retirement, rising to the rank of full professor in a position created especially for him. (Bob passed away last April at the age of 87.)

Bob had become intrigued by a report from reproductive biologist M.C. Chang of the Worcester Foundation of Experimental Biology in Shrewsbury, Mass., who had successfully fertilized a rabbit egg in vitro. Building on earlier work by French reproductive biologist Charles Thibault, Chang observed the presence of two pronuclei. (One pronucleus contains the genetic message of the father and one contains the genetic message of the mother.) He showed this to be proof positive of fertilization by transferring a rabbit egg, fertilized in vitro with a black rabbit’s sperm, into a white rabbit and thereby producing a litter of black rabbit pups. By 1962, Chang had undertaken additional research. He reported that an alternate proof of in vitro fertilization could be seen that would not require transfer of the zygote and the birth of rabbit pups. Instead, if one found two pronuclei and also saw the tail of a sperm embedded in the cytoplasm (the jelly-like substance that fills the cell), this would suffice as incontestable proof of fertilization.

This latter criterion—the need to see the tail of a sperm in the cytoplasm—ended up being of great significance in the work that Bob Edwards would do at Hopkins.

Soon after Bob arrived at Cambridge in 1963, he was prompted by Chang’s report that IVF could be accomplished in a rabbit to try attempting it in a mouse. He also became obsessed with the notion that IVF could be—and should be—applied to humans. For that, he would need human oocytes. He contacted every obstetrical and gynecological specialist in the Cambridge area and was disappointed to discover that he could find no one who thought that it was feasible to supply him with human oocytes.

He expanded his search and had a response from Molly Rose, a London obstetrician who had delivered two of Bob’s daughters while he was at Mill Hill near London. She did supply a few human oocytes to Bob—albeit only one at a time and at infrequent intervals. Furthermore, Bob had to travel from Cambridge to London, pick up the oocyte, return to Cambridge and expose the oocytes to human sperm. He did this five times and had no indication in any of the oocytes that fertilization took place.

Bob’s wife, Ruth, shared his frustration with obtaining so few specimens and suggested that he contact Victor McKusick ’46, then chief of Genetics at the Johns Hopkins School of Medicine, and ask whether it would be possible for him to obtain human oocytes if he came to Hopkins. Bob wrote to Victor, who on receiving the letter referred it to me.

I then was a member of the Department of Gynecology and chief of Hopkins’ Crytogenetics Laboratory and replied through Victor that I thought it was entirely possible that a supply of human oocytes could be obtained at Hopkins. This was because at that time a therapy for polycystic ovarian disease (PCO), a relatively common endocrine disorder, was wedge resection of the ovaries. We were doing one or two of these wedges per week, and it seemed perfectly feasible to give Bob a portion of the wedge.

A normal ovary weighs about 8 grams, the polycystic ovary averages about 30 grams, and the wedges usually weighed about 10 grams. It seemed to me that if we could give Bob half of a wedge, he would have about 5 grams of ovarian tissue. The remaining half was required for pathological examination.

This, in fact, was the protocol adopted—after much discussion—when Bob arrived in Baltimore in July 1965 and joined Hopkins as a fellow. He was able to tease eight to 12 oocytes from the one half of each removed wedge. Although most of the oocytes came from the patients with PCO, a few whole ovaries became available from patients who required ovary removal for a variety of reasons.

Bob would place the liberated oocytes in culture medium and allow them to mature overnight (i.e., go to Meiosis II, at which stage fertilization is possible). Indeed, human oocytes did “spontaneously” mature. The “spontaneous” maturation phenomenon in the human oocytes was the subject of the first paper from Bob’s work at Hopkins.

In addition to the maturation of the oocyte to M II, Bob was very keen that we figure out a way to capacitate—or enable—the sperm to do its job.

Chang and Australian Collin Russell “Bunny” Austin had independently discovered—using the rabbit—that freshly ejaculated sperm were not capable of fertilizing a mature rabbit egg. They showed that if these sperm stayed in the fallopian tube of the rabbit from eight to 10 hours, they acquired the capacity to achieve fertilization.

Bob and I and others in our group had many discussions on how to accomplish capacitation in our experimental model. Bob came up with the notion that we try placing small pieces of the human female genital tract in the culture tube. My role was to furnish such samples.

It was necessary to have a negative control so we used 56 oocytes for this purpose. The sperm were washed with saline by what we now call a “swim-up.” Then we placed the sperm in the culture tube with the liberated eggs.

In retrospect, the results are interesting. After 24 hours in culture, 17 of the 56 oocytes did not mature. They still had a germinal vesicle, or an enlarged nucleus that had not completed its division. Seven degenerated. Twenty-six did mature to M II and therefore were ready for fertilization, but were unfertilized. However, three others had two beautiful pronuclei and one had four pronuclei. Great efforts were made to find sperm tails. None could be found.

There was much discussion about these pronuclei. If they were not real pronuclei, what were they? Since it was thought that it was impossible for a saline wash to capacitate the sperm, the matter was closed by a shrug of the shoulders. In retrospect, we now know that a saline wash will capacitate human sperm. (This assumes that capacitation in the human is really required; there still is some uncertainty about that point.)

What we thought was a negative control turned out to be a positive control.

Of course, we didn’t know it at the time, so we continued our experiments. We tried sperm that had penetrated human cervical mucus at mid-menstrual cycle, thinking that this possibly could cause capacitation. Seven M II oocytes were exposed to such sperm but no fertilization could be observed—that is, we had no cells with two pronuclei.

There became available a human fallopian tube removed on the 17th day of a menstrual cycle. Scrapings from this tube were put in the culture medium. Of 20 oocytes, 15 went to M II and of these, two had two pronuclei—but no sperm tails.

We also undertook a series of experiments aimed at achieving capacitation of the human sperm using the rabbit. In these efforts, we placed sperm in the rabbit’s uterus for various lengths of time and then recovered them by irrigation. Some 118 oocytes were used in the rabbit experiments. There were three oocytes that may have had vanishing pronuclei, but it was not possible to confirm this by fixation and microscopic examination.

After Bob’s time was up in Baltimore he returned to Cambridge, but we continued our research at Hopkins. When five macaque monkeys became available, we placed a total of 67 mature oocytes with human sperm in the fimbria of the monkeys (with the help of Ted Baramki). This was what we now call a GIFT procedure. At intervals of 12 to 18 hours after the injection of the gametes, a hysterectomy and bilateral salpingectomy was done and an attempt was made to flush the specimens. In all, only two unfertilized oocytes were recovered. What the monkeys do with human gametes remains a mystery.

The experiments that I have just described were published in the September 1966 issue of the American Journal of Obstetrics and Gynecology under the title “Preliminary Attempts to Fertilize Human Oocytes Matured In Vitro.” We called our results “preliminary attempts” because we didn’t realize that the pronuclei alone were sufficient evidence of a successful in vitro fertilization.

As it turns out, we did not need to see a sperm tail in the cytoplasm. We had succeeded in achieving the first in vitro fertilization of a human egg—but we didn’t know it.

Back in Cambridge, Bob must have sensed that our work at Hopkins was crucial to what he sought to accomplish. In his 1980 book, A Matter of Life: The Story of a Medical Breakthrough, Bob says that he left Baltimore “exultant,” and refers to his experiences at Hopkins as “decisive.”

Bob persisted, and finally, with gynecologist and obstetrician Patrick Steptoe, he succeeded in overseeing the normal birth of the world’s first-ever IVF baby, Louise Joy Brown, in the United Kingdom on July 28, 1978. Three years later, with my late wife Georgeanna Seegar Jones ’36, we succeeded at our Jones Institute of Reproductive Medicine at Eastern Virginia Medical School in ushering into the world the United States’ first IVF baby, Elizabeth Carr, on December 28, 1981.

Bob’s work finally was recognized in 2010 when he was awarded a Nobel Prize in medicine. Those of us who knew the details of the studies initiated at Johns Hopkins in 1965 were disappointed that it took the Nobel Committee so long to bestow this award, which was well-deserved and should have been given to Bob much earlier.

After Bob received the Nobel Prize, a plaque commemorating his work in Baltimore was placed in Hopkins’ Department of Obstetrics and Gynecology. IVF was born because of its inception—one could say its fertilization—with 268 human eggs at Hopkins.