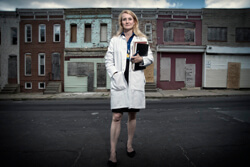 Andrea Cox is leading a vaccine trial among IV drug users in Baltimore.

While researchers and clinicians have great hopes for the new classes of drugs for hepatitis C,  no drugs, no matter how powerful or well tolerated, will ever truly conquer the disease. That will require a vaccine.

In April 2012, Hopkins researchers began to enroll participants in the first-ever Phase I/II clinical trial of a hepatitis C vaccine. If it proves successful, it will mark the culmination of more than 20 years of research on the virus that causes the illness.

“The hepatitis C virus is very diverse, even more diverse than HIV or influenza,” says Andrea Cox, an associate professor of medicine, who is leading the trial after more than a decade of research on the virus’s behavior. “Even within a single individual, the hepatitis C virus circulates as what’s called a ‘quasi-species.’ You can think of it as a swarm of viruses that are related but not identical.”

HCV’s genetic diversity has made vaccine development an enormous challenge. The vaccine under trial—developed by the Italian drug company Okairos—has tried to solve the problem with sheer firepower.  The vaccine is designed to generate an immune response that is so robust that it will not much matter which genetic HCV variants the patient encounters in the future. Scientists have done this by enveloping harmless fragments of the HCV virus within other viruses that cause virtually no illness. Although the viruses in the vaccine cause nothing worse than a common cold, they inspire extremely powerful immune responses, in part because they do not normally circulate in humans. The recipient’s immune system then “remembers” both the virus and the fragmentary-HCV antigens that were smuggled inside the virus. If HCV ever enters the recipient’s body again—even if it’s a different genetic variant than the one in the vaccine—the immune system will have enough of an edge that it can prevent the establishment of a chronic hepatitis C infection.

At least, that is the hope. The ongoing double-blind, placebo-controlled trial, which is sponsored by the NIH, will help demonstrate whether the vaccine actually does prevent chronic hepatitis C infection. The participants are being enrolled from an ongoing longitudinal study of Baltimore residents who have recently become injection-drug users. It is estimated that up to half of injection-drug users acquire HCV within a year of starting to inject drugs, so this is a population at high risk.

“A very important part of the trial, which complicates it, is that we’re doing everything we can to prevent participants from becoming infected,” Cox says. “We’re offering them drug counseling. We’re offering them referrals to needle exchange and drug treatment programs. Two of our staff members have decades of experience helping people get off drugs. All participants are extensively counseled about minimizing the hazards of drug use.” The infection rates observed in this trial will probably be significantly lower than among injection-drug users with weaker access to health services.

Regardless of the outcome of this trial, Cox intends to keep pressing for an effective vaccine. “It’s very difficult to believe that we’re ever going to get the disease fully under control on a global scale through drug treatments,” she says. ”It could be much more effective to immunize people as children, so they’re protected long before they ever encounter HCV.” —DG