Archives - A New Weapon Against Leukemia

A New Weapon Against Leukemia 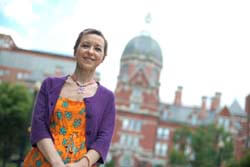 Dorothy Schilder considers herself pretty healthy. The McLean, Va., resident exercises regularly and follows a Mediterranean diet. So when she noticed a few nagging problems in the fall of 2011—a sinus infection, bruises, a rash on her face—she chalked them up to just being worn down.

After her mother, a nurse, urged her to get blood work, she went straight from an exercise class to her doctor’s office, only to be told that what she thought was a mild health issue was in fact acute myeloid leukemia (AML). Her doctor booked her right away with an oncologist, who quickly got her into a chemotherapy program. Although treatment appeared to be working, says Schilder, 49, “I had this feeling something wasn’t going right.” When she relapsed a few months later, she was referred to Johns Hopkins Kimmel Cancer Center.

Shortly thereafter she encountered oncologist Mark Levis, who was directing a multicenter phase II clinical trial of a drug he helped develop called quizartinib that blocks a gene called FLT3-ITD. In healthy people, FLT3 produces an enzyme signaling bone marrow stem cells to divide and replenish, but in a quarter of AML patients, the disease mutates FLT3 so it stays on permanently, causing rapid growth of leukemia cells and making the condition harder to treat.

Survival for patients like Schilder, with relapsed FLT3-ITD AML who have failed to respond to conventional treatment, is “near zero,” Levis says.

“A FLT3-ITD mutation tells us that, typically, patients will need very intensive chemotherapy just to achieve a remission, and then the disease will regrow quickly,” Levis says, “so we have learned to try to perform a bone marrow transplant soon after we get the patient into remission, before the cancer relapses.”

The new drug, available in oral form, is so potent that it typically starts working in just two days, though it may take up to 60 days to reduce the AML cells to a very low or undetectable level in the bone marrow.

Schilder enrolled in the trial, and did so well that she qualified for a bone marrow transplant, performed last November. Other trial participants fared well, too. Leukemia was completely cleared from the bone marrow in more than a third of the 137 participants, many of whom also moved on to potentially curative bone marrow transplants despite failing prior therapies. “It caught us by surprise how well [the drug] works,” Levis says.

Levis presented results of the phase II study at the American Society of Hematology meeting, and is working with colleagues at the Eastern Cooperative Oncology Group to plan a phase III trial. Long-term survival from the therapy is still unknown, but some patients have survived two years after treatment with no disease recurrence.

As for Schilder, who for now remains on another cancer-fighting drug called sorafenib, “the odds were very much against her, but they’re not anymore,” Levis says.