Archives - A Cure for Aneurysms

A Cure for Aneurysms 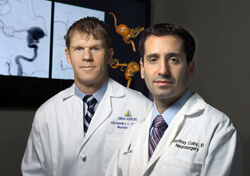 Doctors have come a long way in treating brain aneurysms over the past several decades, says Hopkins neurosurgeon Alex Coon.

Surgeons are now able to avoid the risks associated with open surgery by using a process known as  “coiling,” which involves threading a long, thin platinum wire from an artery in the groin all the way up to the aneurysm in the brain. There, the wire is “coiled”—packed into the aneurysm so that it fills the pouch. If all goes well, the coiled platinum induces a clotting response, which closes off the aneurysm.

Coiling has greatly advanced aneurysm treatment, Coon says. “It’s superior to open surgery in terms of duration of the procedure, not needing to open the skull, and recovery times,” he explains. “But the downside is that there’s a high recurrence rate.”

In about 10 to 30 percent of cases, he says, the clot dissolves and the aneurysm reappears. The risk is even greater for very large aneurysms, which have recurrence rates of up to 50 percent.

However, a new procedure offered at Johns Hopkins could prevent recurrence for all sizes of aneurysms. It involves placing a very flexible, thick mesh stent in the blood vessel. These stents, which resemble miniature Slinky toys, prop open the blood vessel and divert flow away from the aneurysm. Over time, Coon explains, reduced flow to the aneurysm causes it to clot off and eventually close on its own.

Although the procedure can take weeks or months to work, far longer than the nearly instant results from coiling, the stent offers the possibility of permanently removing the aneurysm. “This device offers a cure, with no recurrence,” Coon says.

Over the short time that this stent, known as the Pipeline Embolization Device, has been offered in the United States, Johns Hopkins has been one of the leaders in performing this surgery, Coon says. He and his colleagues have placed more than 150 of the stents in patients and traveled around the country teaching the technique to other physicians.

Coon was recently joined by a new colleague, Geoffrey Colby, who trained at Johns Hopkins for his neurosurgery residency as well as a fellowship in techniques that allow problems in the brain to be treated through instruments fed through blood vessels elsewhere in the body. “Having a larger team,” Coon says, “will make this therapy even more accessible for our patients.”  Christen Brownlee