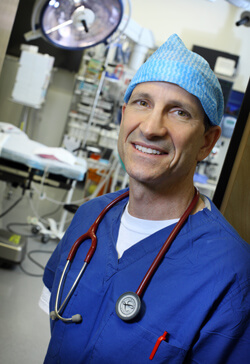 While blood loss during surgery has declined over time, says Steven Frank, blood-ordering guidelines were never reconsidered, “leading to a lot of unnecessary work to prepare blood for surgery.”

Hopkins researchers have developed new guidelines—the first in more than 35 years—to govern the amount of blood ordered for surgical patients. The recommendations, based on a lengthy study of blood use at Hopkins Hospital, can improve patient safety and potentially save the medical center more than $200,000 a year, the researchers say.

A report on the research that led up to the new guidelines, published online in the journal Anesthesiology, suggests millions of dollars a year nationwide could be saved in laboratory costs and wasted blood if other hospitals also reconsider how they prepare blood for surgery.

The guidelines, based on a mathematical algorithm developed and tested by the Hopkins team, ensure that blood is readied for surgeries most likely to require transfusions (such as open heart surgery and liver surgery) and that time isn’t spent preparing blood for surgeries that rarely require them—such as appendectomy, tonsillectomy, thyroidectomy, and removal of the gallbladder.

“In 1976, when the last guidelines were published, there were 60 surgical procedures on the list. Now, with the addition of laparoscopy, robotic surgery, and other minimally invasive techniques, there are 135 categories of surgical procedures,” says study leader Steven M. Frank, an associate professor of anesthesiology and critical care medicine at Hopkins. “Blood loss has declined over time as surgery has evolved, but the guidelines were never reconsidered, leading to a lot of unnecessary work to prepare blood for surgery.”

When blood is ordered for a surgical case, there are expenses associated with typing a patient’s blood and screening for various antibodies to ensure a good match is found, as well as with preparing the actual units and bringing them to the operating room, Frank says. Meanwhile, unused blood set aside for surgical patients is removed from the available pool for 24 hours, and while it can be used eventually, recent research by his team suggests that blood stored longer than three weeks begins to lose its “shelf life”—the capacity to deliver oxygen-rich cells where they may be needed most.

In some cases, Frank says, Hopkins Hospital was under-ordering blood, a condition also remedied by the new set of guidelines. Liver transplants are most likely to require the largest amount of blood, with the recommendation that 15 units be prepared and in the operating room.

While the blood-ordering guidelines developed are specific to Hopkins Hospital, they can be adapted to other hospitals, Frank notes. Also, he says, hospitals with computerized anesthesia records—roughly 50 percent of hospitals in the United States—can use the algorithm developed by the Johns Hopkins team to develop their own hospital-specific guidelines.  Stephanie Desmon