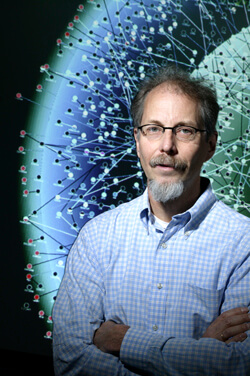 In July, Jef Boeke, professor of molecular biology and genetics in the Institute for Basic Biomedical Sciences, traveled to London for an international meeting on a project near and dear to his heart: the building of the first synthetic yeast genome. “Rumor has it microbrew beer samples will be available—as [they] should be for a yeast meeting. See you in London?” was the lighthearted message on the home page of the Second International Synthetic Yeast Genome Consortium Meeting, known as Sc2.0.

Turns out that yeast is more than just a necessary ingredient for beer- and bread-making. It has the potential to be “designed” to produce drugs or new types of fuel. But why yeast? “Yeast cells are organized much like mammalian cells,” explains Boeke, who launched the yeast genome project more than five years ago. “Unlike bacteria, which have circular strands of DNA, both yeast and mammalian cells have linear strands of DNA and nuclei.” Yeast’s similarities to mammalian cells could make it the key to ushering in the next generation of gene therapy and disease cures in humans.

In recognition of his pioneering synthetic biology work, Boeke was inducted into the National Academy of Sciences last spring, one of 84 new members elected in 2013. Best known for revealing how mobile yeast and human transposons, or “jumping genes,” move around the genome, Boeke has been asked to serve on the National Academy’s Forum on Synthetic Biology.

Constructing a yeast genome—made up of 16 chromosomes containing 6,000 genes and 12 million nucleotides long—requires a lot of teamwork. More than 100 scientists from around the world, including China and the United Kingdom, are helping to build it. Many of these scientists met at Sc2.0 to discuss their progress. “About 50 percent of the DNA is synthesized, and about 20 percent of it is in the yeast and functioning,” Boeke reported upon his return from the conference, noting that he and his team—including key Hopkins collaborators Joel Bader and Srinivasan Chandrasegaran—plan to finish construction by 2017.

Hopkins undergraduates, professors, and even a few exceptional high school students have also joined in the effort, through Boeke’s Build-A-Genome course, going into its sixth year at Johns Hopkins University this fall. After boot camp, each student is given the keys to the lab and assigned 10,000 base pairs or more of the genome to synthesize. As segments of the genome are assembled, the researchers install them in yeast cells in place of the pieces of native DNA. “It’s like editing a book, instead of writing it from scratch,” Boeke explains. “We’re taking what nature gave us and fine-tuning it.”  EM