Archives - Where A Gift Took Flight

Where A Gift Took Flight 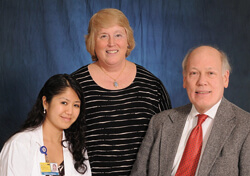 Xuan “Tashin” Le-Nguyen ’12 (left) was the 2011-2012 recipient of a scholarship established by Paula and Stephen Wetherill to honor Paula’s aunt, Jewel Hart Coombe.

All it took was a single look for Stephen F. Wetherill, A&S ’68, Med ’71, and his wife, Paula R. Wetherill, to make their decision. In 2008, the Wetherills had traveled from their home in Wilmington, Delaware, for a “hard hat” tour of the Anne and Mike Armstrong Medical Education Building, then under construction. Climbing the steps in the main lobby to the second floor, the couple gazed up at the soaring atrium and at the spacious area surrounding them.

“When we encountered this wonderful space, Paula and I instantly saw it as a focal point for the student body,” recalls Steve Wetherill. “The open feeling of taking flight there was a perfect match with the spirit of Paula’s aunt. We knew we had the answer for what we wanted to do.”

Paula’s aunt was Jewel Hart Coombe, a nurse who had spent her entire career in the military, first in the U.S. Army Nurse Corps and later as a Major in the Air Force Reserve. During her years in the Army, Coombe had travelled around the globe on various posts, including a stint on the front lines in Vietnam from 1966 to 1967 while serving with the 12th Evacuation Hospital.

In her later years, Coombe, who had no children and whose husband predeceased her, directed that most of her estate be left to a charity of her niece’s choice. “Although I was honored, I was at first overwhelmed by the responsibility,” says Paula Wetherill, who became the executor in 2007. “I wanted my aunt’s estate to go to one organization where it could create the greatest impact, so we could say, ‘Look at what we were able to do with my aunt’s gift.’” While in the throes of settling the estate in California, Paula shared her concerns with her husband. His response was immediate, “Why not give it to Hopkins?”

The suggestion made sense. The Wetherills already had a philanthropic relationship with the School of Medicine, thanks to generous gifts to the School of Medicine Annual Giving Scholarship Fund over the years.  A flurry of conversations and visits ensued between the couple and the school’s development staff, culminating in that fateful visit to the new Armstrong Medical Education Building. “It was fortunate that we had sufficient funds to underwrite the atrium and to establish a named scholarship,” says Steve Wetherill. “We gained the best of both worlds, supporting medical students and the facility that houses technologically advanced classrooms, a first-class gross anatomy lab, and open spaces for learning and collaboration.”

Xuan “Tashin” Le-Nguyen ’12, whose undergraduate studies at Yale focused on molecular, cellular, and developmental biology, was the 2011-12 recipient of the Jewel Hart Coombe/Stephen F. and Paula R. Wetherill Scholarship. “Receiving this scholarship allowed me to concentrate more fully on my studies and not have to work part time, which can be a real challenge,” says Le-Nguyen, who foresees a career that includes teaching, research, and a clinical practice in ophthalmology. “It has been a great help—I can’t tell you how grateful I am for such a wonderful opportunity.”

In the Armstrong Building, on a wall in the bustling student commons area, is a plaque dedicating the area to Jewel Hart Coombe. “It’s a very emotional experience for me to visit the Armstrong Building and see that plaque,” says Paula Wetherill. “It’s kind of like visiting her. And it’s so wonderful to witness the tangible outcomes of this gift and to get to know our scholarship recipients. I feel like I’m now a part of Hopkins, like Steve.”

Her husband agrees. “When you’re given a chance like I was, you want to give back, especially to a great institution like Hopkins,” he says. “This was the right gift at the right time for the right purpose—and named for the right person. We found the most fitting tribute for Jewel.”

To learn more about the ways you can make a named gift to The Johns Hopkins University School of Medicine, please contact the School of Medicine Development and Alumni Relations Office at 410-516-0776 or jhmalumni@jhmi.edu.  David Beaudouin

In recognition of his “abiding commitment to excellence in medical care,” Stephen Wetherill recently was presented with the 2012 Laureate Award from the Delaware Chapter of the American College of Physicians (ACP) at their Annual Scientific Meeting. In honoring Wetherill, John H. O’Neill, Jr., DO, FACP, Governor of the ACP Delaware Chapter, noted, “Dr. Wetherill is a long-standing and loyal supporter of the College, has rendered distinguished service to the Chapter, and has upheld the high ideals and professional standards for which the College is known.”