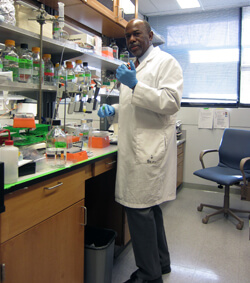 Raised in the small southern Arkansas city of Camden, James E. K. Hildreth ’87 recalls his mother telling him, “Your circumstance does not
limit your possibilities.”

“James has lived by that motto to become one of the most influential HIV doctors in the world,” said Dean/CEO Edward Miller, who recently retired. “He is a model alumnus.” Hildreth was named to the Society of Scholars in April and received a 2012 Alumni Association Knowledge for the World Award in May. Both honors recognize his extraordinary achievements as an internationally renowned AIDS researcher, mentor to other medical scientists, and academician.

Today, as dean of the University of California, Davis, College of Biological Sciences, Hildreth oversees 125 faculty, 5,312 undergraduates, and 455 graduate students, and manages a $90 million budget, which includes nearly $60 million for research. He particularly enjoys introducing undergraduates to the lab. “Almost every year, I invite a few undergraduates to work in my lab. [They] ask the questions no one else thinks to ask, and sometimes they come up with the answers no one else has thought of,” he says.

A 1979 graduate of Harvard, Hildreth became the first African-American Rhodes Scholar from Arkansas. After earning a PhD in immunology from Oxford in 1982, he began medical school at Hopkins. He joined the faculty upon graduation and rose steadily in the ranks, becoming the first African-American in Hopkins history to earn a full professorship with tenure in the basic sciences, in 2002. From 1994 to 2001, Hildreth also served as the first associate dean for graduate student affairs. While in that job, he created a summer research program for underrepresented minorities and actively recruited undergraduate students to graduate programs.

Hildreth’s research on AIDS, begun in 1986, has resulted in more than 80 scientific articles and seven patents. One protein he discovered while at Oxford is the basis for an FDA-approved drug, Raptiva, used to treat psoriasis.

During a seven-month stint in 2001 as chief of the NIH’s Division of Research in the National Center on Minority Health and Health Disparities, Hildreth and his research team discovered that cholesterol is active in HIV’s ability to penetrate cells, and that removing the fatty material from a cell’s membrane can block infection. With that knowledge, Hildreth’s team then developed an odorless, undetectable contraceptive vaginal cream that destroys the AIDS virus and holds the promise of stopping the disease’s transmission.  NAG