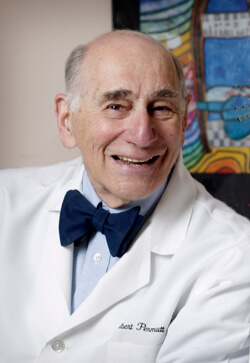 Acclaimed physiologistSolbert (Sol) Permutt, a key figure in the creation and expansion of the School of Medicine’s Division of Pulmonary and Critical Care Medicine and a beloved mentor to generations of physicians specializing in those fields, died on May 23 of esophageal cancer. He was 87.

“It’s not possible to adequately describe the extent to which Sol’s curiosity, vision, and commitment drove not only the creation of our division but, to a significant extent, the creation of pulmonary medicine as a discipline,” said Landon S. King, professor of medicine, Hopkins’ vice dean for research and chief of pulmonary and critical care medicine.

“He was the smartest physiologist and one of the wisest men I will ever meet,” said physiologist Charles Wiener, professor of medicine, vice director of the Department of Medicine, and Dean/CEO of Perdana University Graduate School of Medicine.

Wiener, who came to Hopkins as a fellow in 1985, said he quickly found Permutt to be an extraordinary mentor. “He always had time for young people and loved sharing his experience, wisdom, and excitement for medicine, scholarship, and education,” said Wiener.

Born in Birmingham, Permutt earned his MD from the University of Southern California and came to Hopkins as a fellow in medicine and environmental medicine in 1956. Two years later, he became chief of the Division of Cardiopulmonary Physiology at the National Jewish Hospital in Denver.  He returned to Hopkins in 1961 as an associate professor of environmental medicine at what now is the Bloomberg School of Public Health and remained on the faculty for nearly a half century. He became a professor of medicine and environmental health sciences in the School of Public Health in 1965 and a professor of medicine in the School of Medicine in 1972. He retired in 2006.

From 1972 to 1981, Permutt was director of the Respiratory Division in Hopkins’ Department of Medicine, assuming leadership of both the clinical and research programs. He inaugurated a collaborative program integrating the clinical, research, and educational activities of the division with programs in the School of Public Health. He also oversaw extensive growth in the division’s clinical program, including the opening of a new intensive care unit and a new bronchoscopy program, as well as of clinical consultative and inpatient services provided to other Baltimore-area hospitals.

More than six feet tall, Permutt was known for his seemingly boundless energy—riding a bicycle from his North Baltimore home to Hopkins Hospital well into his 70s—as well as his signature, large bow ties, which he began wearing as a teenager.  NAG­