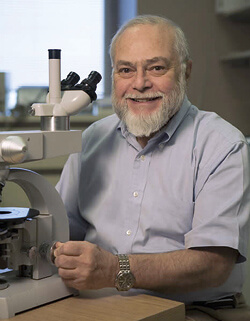 Nearly every year from 1974 to 1994, neuroscientist and neurologist Mark Molliver received one teaching award after another—making it hard to determine which of his accomplishments had the most impact: his four decades of classroom influence on uncounted future neuroscientists or his landmark discoveries on the structure of the brain and its response to drugs.

Molliver died on May 10 at Johns Hopkins Hospital of complications following cardiac arrest. He was 75.

His friend and colleague SolomonSnyder, founder and long-time director of what now is known as the Solomon H. Snyder Department of Neuroscience, gives equal weight to both. “Mark was one of the country’s greatest neuroanatomists,” says Snyder, himself the discoverer of the brain’s opiate receptors. He credits Molliver with making “major discoveries about the role of serotonin,” the molecule in the brain most closely associated with feelings of well-being and happiness. “For years and years he also was the premier teacher of neuroanatomy for our medical students,” Snyder adds.

Neuroscientist David Linden, another former colleague of Molliver’s, agrees. “Mark was one of our very best teachers, extraordinarily gifted and clear,” says Linden. “What really stood out about Mark was his extreme collegiality and warmth, a gentle manner with everyone. He was scientifically critical when called for but a real mensch and always willing to help people.”

In addition to his discoveries about serotonin, Molliver uncovered the adverse impact on the brain of the obesity drug Fen-Phen, which was among the factors prompting the FDA to ban it in 1997. His research also produced important findings about the drug MDMA, commonly known as “ecstasy.” His research showed that both Fen-Phen and ecstasy caused brain neurons to die, leading to a reduction in serotonin levels.

Boston-born, Molliver received his undergraduate degree from Harvard in 1958 and his medical degree there in 1963.  He came to Hopkins in 1965 as a postdoctoral fellow in neuroanatomy. He later held a second Hopkins postdoctoral fellowship in neurophysiology under Vernon Mountcastle ’42, often called the “father of neuroscience” for his discovery of the columnar structure of the brain’s cells.

In 1969, Molliver became one of the first residents in Hopkins’ then-just created Department of Neurology. He joined the faculty as an assistant professor of anatomy and neurology in 1971, then rose through the academic ranks until he held full professorships in neuroscience and neurology. Although he retired in 2006, he continued to come to work and attend departmental faculty meetings.

“Mark was tenacious and still passionate about research,” says Richard Huganir, director of the neuroscience department. “He still was collaborating with other faculty members and coming to meetings until two weeks before his death.” NAG