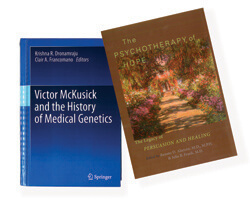 Krishna Dronamraju (Fellow, medical genetics,1965) and Clair Francomano ’80 (HS, faculty, medical genetics, 1980-94) have assembled an all-star lineup of medical luminaries and family members to pay tribute to Victor McKusick (1921-2008), the genetic medicine giant whose 65-year career at Hopkins—from 1946 School of Medicine graduate to ever-active, iconic figure until his death—was the longest consecutive tenure of any faculty member in the School of Medicine’s history.

Dronamraju, now president of the Foundation for Genetic Research in Houston, contributed two of the 17 essays recounting McKusick’s professional accomplishments and personal characteristics. Francomano, now director of adult genetics at the Harvey Institute of Human Genetics at GBMC—and part of the research team at Hopkins that in 1991 discovered the gene that causes Marfan syndrome—also contributed two essays. One of these was written in collaboration with the late David Rimoin, a 1967 Hopkins PhD, fellow, and house staff member who became a pioneering medical geneticist at Los Angeles’ Cedars-Sinai Medical Center. He died
last May.

The brief introduction to the collection was written by 1978 Nobel laureate Hamilton Smith ’56 (faculty, microbiology, 1967-1998). Other current or former faculty, house staff, or fellows who contributed appreciation or recollection pieces about their erstwhile mentor or colleague include Aravinda Chakravarti, Edison T. Liu, Donlin Long, Reed Pyeritz, and Sir David Weatherall.

The book also contains eight eulogies, some delivered at McKusick’s funeral, including one written by former School of Medicine dean Richard S. Ross. In addition, it features a 29-page bibliography of McKusick’s 172 scientific papers.

In his 18-page essay, “Victor McKusick and the History of Medical Genetics,” Sir Peter S. Harper (fellow, medicine, 1973), former professor of medical genetics at the University of Wales College of Medicine, writes, “It is greatly to be hoped that in due course, a detailed and objective scientific biography [of McKusick] will be written.”

Whoever writes it will find this volume a valuable source.   Neil A. Grauer

The Psychotherapy of Hope: The Legacy of Persuasion and Healing
Renato D. Alarcón, MD, MPH, and Julia B. Frank, MD
(JHU Press, 2012)

A half-century ago, Hopkins’ Jerome D. Frank revolutionized the perpetually debate-riven and factionalized field of psychotherapy with the publication of his landmark 1961 book, Persuasion and Healing: A Comparative Study of Psychotherapy.

Frank (1909-2005), who had come to Hopkins in 1940 as a resident under Adolf Meyer, systematically analyzed the effectiveness of the multiple, fiercely competing theories of psychotherapy— numbered by one scholar at more than 500.

Employing carefully devised, innovative experiments on the efficacy of these conflicting psychotherapeutic methods, Frank and his Hopkins colleagues developed a liberating overview, or meta-model, for its practice. It held that certain common factors could be found in the application of all the methods, and that these common elements of treatment accounted for psychotherapy’s success.

Frank wrote that a key to any effort to address the mental distress of patients who feel they have lost control over their lives and emotions is to strive toward restoring the patients’ morale and renewing their hope that they can, indeed, understand the source of their distress and master it.

Rarely has a single book had such a profound impact on a medical specialty. Revised in 1973 and 1991, Persuasion and Healing remains in print, in many languages. Its three editions have been “cited more than 1,600 times in the literature, a prodigious accomplishment,” write Renato D. Alarcón, a Frank protégé, and Frank’s daughter, Julia B. Frank, who became a psychiatrist herself and collaborated with him on the third edition of his book.

In 15 essays—six on the basic principles of psychotherapy and nine on current practices in the field—the contributors update Frank’s central themes, thoroughly critique the latest developments in psychotherapeutic methods, and offer proposals on how to improve its practice. NAG