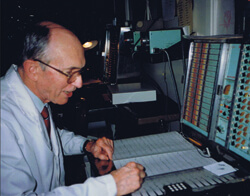 Ernst F.L. Niedermeyer,acknowledged worldwide as the foremost expert in electroencephalography and its diagnostic value, died of colon cancer on April 5 at the age of 92.

Born in Germany, he moved with his family to Vienna when he was a teenager. He was inducted into the German Army after high school, and began his medical studies even as World War II got under way. He was pulled from school and sent to join a Panzer division on the Russian front, however, when it was discovered that his maternal grandfather had been Jewish. Niedermeyer survived the horrendous battlefield winter of 1943-44, later telling a friend that he and his fellow soldiers didn’t care about the Army’s mission or Nazism, they just wanted to find enough to eat and avoid capture by the Russians.

Wounded twice, he eventually was captured by American forces in 1944 and then put on a U.S. troop ship full of wounded soldiers bound for home. He helped treat them, then was sent to prisoner-of-war camps in the Midwest and West. He returned to Austria after the war and earned his medical degree at Leopold-Franz University in Innsbruck, where he ultimately would become acting chief of the department of Neurology and Psychiatry.

When his hospital obtained an encephalograph under the postwar Marshall Plan, Niedermeyer had to learn how to use it after the technician who operated it was transferred.  He quickly mastered the device, began applying its recordings of brain waves to his growing interest in epilepsy, and soon became instrumental in making electroencephalography a significant diagnostic and research tool.

Niedermeyer moved to the University of Iowa in 1960 and in 1965 to Hopkins, where he was named electroencephalographer-in-chief.  By the time he retired in 1997, he had become “the most famous electroencephalographer in the world,” says neurologist and neurosurgeon Ronald Lesser, who succeeded Niedermeyer as head of the EEG lab. “He frequently was invited to lecture in other countries, and influenced the interpretation of EEG around the world,” Lesser says.

An avid hiker and mountain climber, Niedermeyer also was an excellent classical pianist.  Neil A. Grauer