Archives - From Twanging to Talking

From Twanging to Talking 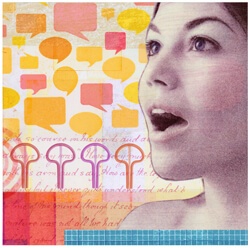 Musician Wayne Hankin was listening to the radio one day in December 2007 when he heard a segment featuring Hopkins head and neck surgeon Joe Califano, who spoke about the post-surgery challenges facing patients with advanced laryngeal cancer.

While a total laryngectomy offers a high cure rate, “the obvious downside is no more sound source for patients’ voices,” says speech language pathologist Kim Webster, whose Hopkins caseload is filled with patients dealing with this issue.

Most patients have one of two options for replacing their natural voice: either the hand-held, battery-operated electrolarynx, or a tracheoesophageal prosthesis (also known as a TEP). A third method, used less commonly today, is esophageal speech, a technique in which patients learn to “burp” their words by swallowing air and forcing it out of the esophagus.

Though these methods do offer patients ways to talk, each has its drawbacks, Califano explains. Electrolarynxes and TEPs can cost thousands of dollars over patients’ lifetimes for care and upkeep, and esophageal speech can be extraordinarily difficult to learn. None of these options is a good fit for patients in developing countries, where resources such as equipment and batteries—and even education—are scarce.

Hankin, who plays the jaw harp professionally and uses it to generate twangy, buzzy-sounding speech for fun, wondered whether his instrument might offer an alternative for patients. So he called Califano.

Initially, the doctor was skeptical. “I thought it sounded like a nutty idea,” Califano says. “But when Wayne started talking on the phone with his jaw harp, I could see that it really works.”

Califano invited Hankin to Hopkins to present his idea to himself and Webster in person. After a couple of short lessons, both were speaking with the instrument—suggesting that it might be a viable option for patients, too.

Within months, Webster and Hankin had started a small pilot study to teach jaw harp-generated speech to a dozen total laryngectomy patients. The method is straightforward: Users mouth words while strumming the jaw harp in their mouth. Although results were mixed—not every patient was a fast learner—the majority were able to pick up the technique quickly and with relative ease.

The low-cost jaw harp holds decided advantages over existing technology, Webster says. With no special equipment or batteries necessary and a small learning curve, it could be a great option for patients in resource-poor settings.

Adds Hankin, “If you take care of your instrument and make an effort to learn it, the total charge for patients could be just a few dollars over the course of a lifetime.”

Hankin and Webster presented their work at the American Speech-Language and Hearing Association annual meeting in 2009 and at a Baltimore Adult Communications Disorders Interest Group in 2011. They’re also preparing a manuscript on their pilot trial for publication.

Says Hankin, “This adds another real option to the limited set of tools that cancer patients can use to get their lives back.”  Christen Brownlee