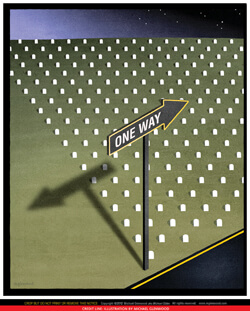 When faced with death at Marooner’s Rock, Peter Pan bravely quips, “To die will be an awfully big adventure.” That’s because  fatality is the ultimate of finalities. None of us knows for sure what happens after death, but most of us can be relatively sure that once we’re dying, there’s no turning back.

But what if the road to death wasn’t as one-way as we’d previously thought? A new Hopkins study suggests that it may be possible to do a 180 from dying—at least, for cells. When scientists exposed batches of cells to deadly poisons, leaving them looking like they’d headed to that vast petri dish in the sky, the majority were still able to bounce back completely after those toxins were removed.

Not only is this finding a testament to the indomitable cellular spirit, but it could also hold plenty of practical value. Better understanding this death-defying process may offer some practical insight on how to save dying tissues after heart attacks or strokes, as well as prevent cancer in cells transiently exposed to toxins.

Findings Too Wild to Believe

As in the Peter Pan novel, this new insight into death—or the lack thereof—got its start with a set of siblings. When Ho Lam “Hogan” Tang began his first year as a doctoral student at the Chinese University of Hong Kong, his younger sister Ho Man “Holly” Tang took a break from her undergraduate biology program at the Iowa State University and joined him in his research as a junior visiting scholar. Hogan’s main project was studying aspects of apoptosis, the process of programmed cell death, which scientists have known about for decades.

Apoptosis can be both positive and negative. For example, cell death is absolutely necessary to sculpt fingers from paddle-shaped hands during development and to kill off rogue cells that could be the start of cancerous tumors. However, it also kills cells in excess after traumatic events, such as a heart attack or stroke, or in degenerative diseases, such as Alzheimer’s disease.

While trying to figure out how the cell’s cytoskeleton, a network of fibers that helps it retain its shape, remolds during apoptosis, Hogan and Holly Tang became curious about whether the cells they had exposed to toxins to kick-start apoptosis were really on an irreversible track to death. Scientists had long considered a set of physical and molecular markers—changes in a cell’s appearance, or the appearance of the activated form of an enzyme known as caspase-3—as unmistakable signs that a cell was definitively going gently into that good night.

But when the Tang siblings saw the same things in their batches of cells, they weren’t so sure.

“We were curious,” Hogan remembers. “We always do experiments together, and sometimes we have some weird ideas. We thought, if it doesn’t cost a lot of time and money, we’d test whether these were really dead cells.”

In some preliminary experiments, the duo waited until the cells surely appeared to be pushing up daisies by the hallmarks other researchers had established, then replaced the toxic brew the cells were sitting in with normal media, a nutritious broth that researchers ordinarily use to grow cells. Within hours, they noticed that most of the cells appeared to turn back, regaining their original appearance and behaving as if they’d never faced mortality.

Hogan Tang recalls that at their next progress seminar—a forum in which a lab member can share his or her findings and get feedback from colleagues—no one believed their results. A few months later, when he received a Fulbright scholarship and started contacting labs in the U.S. where he might go to continue his studies, he ran into the same problem. “They all rejected it,” he says. “They just weren’t interested, or they thought it was too wild an idea.”

But his luck changed when he contacted Denise Montell, a professor in Hopkins’ Department of Biological Chemistry. Montell was open-minded enough, Hogan recalls, to challenge what many researchers believed were central dogmas in apoptosis.

“There’s clearly some point when something is truly dead and can’t come back,” Montell says, “but there’s been a controversy about what constitutes the point of no return for cells.”

Hogan Tang headed for Montell’s lab in 2009 to continue his PhD, soon joined by Holly, who took a job as a lab coordinator for Montell. Together, the team, along with additional colleagues at Hopkins, replicated the experiments performed in Hong Kong. The researchers exposed healthy cells isolated from mice or rats and growing in petri dishes to ethanol, a potent toxin. Within hours, the cells displayed the typical hallmarks of apoptosis, including cell body and nucleus shrinking, cell membrane blebbing (developing irregular bulges), and an altered appearance of cellular organelles. However, when the scientists washed the ethanol away, they watched in amazement as many of the cells plumped back up, smoothed their membranes, and regained normal organelles.

To rule out the possibility that only rare “escaper” cells were somehow managing to dodge death, the researchers counted how many made it. Their findings showed that about 90 percent of the cells managed to survive.

“You can watch an individual cell shrivel up, look like it has no chance, and then come back to life,” Montell says. The team published their findings online in April in the scientific journal Molecular Biology of the Cell.

Repeat experiments showed that the findings held true for a variety of cell types, Montell adds, including mouse brain and rat heart cells. This suggests that the ability to defy death could be universal for all or at least many kinds of cells in the body, she says. Additionally, the team discovered that reversing apoptosis wasn’t just something physical to observe in the microscope. Gene expression data showed that several molecular indicators that researchers had considered signs of imminent death, such as activated caspase-3, also reversed when the cells sprang back to life.

Though part of the apoptosis program includes cells chopping up their own DNA—part of a complicated self-destruction sequence—further tests showed that they could snap back even from this genetic damage, stitching the severed pieces back together. However, more experiments showed that sometimes cells made mistakes, missing pieces of DNA or connecting the wrong pieces.

Since these kinds of errors can lead to cancer, the scientists tested whether surviving cells exposed to toxins had malignant characteristics. Sure enough, they found that a small percentage of the cells grew abnormally, developing some hallmarks of cancerous growth.

Rather than cast a dark pall over this rejuvenation, that last finding could have implications for explaining and treating cancer, as well as a variety of other diseases, Montell says. For example, though researchers know that alcoholics have a propensity toward developing liver cancer, the reasons have been unclear. Based on this discovery, it’s possible that problem drinkers might continually be bringing their liver cells toward the brink of death and that some surviving cells continue on with genetic defects that lead to malignancy.

The results might also explain why cancer cells often develop resistance to chemotherapy. During chemotherapy, cells are transiently exposed to toxic drugs that induce apoptosis, and then the patient is allowed to recover. So while most of the cancer cells die, those that survive may develop genetic defects some of which could contribute to their ability to resist death on the next round.

In effect, the finding could offer new hope for a variety of conditions that center around cell life or death, says Allan Spradling, director at the Carnegie Institution for Science in Baltimore. “Do resurrected cells become monsters that continue to lurk in an organ’s dark corners, or prophets that can rally neighboring cells to carry out novel and beneficial actions? Either way,” he says, “the new knowledge generated by these investigators may soon improve our ability to manage some of the diverse medical conditions that are expected to generate [these] cells.”

Montell, the Tang siblings, and their colleagues plan to continue to investigate the mechanisms behind this ability to bounce back, which they’ve named anastasis, based on research from two acquaintances, Ralph A. Bohlmann and James W. Voelz, who happen to be Greek scholars. While “apoptosis” comes from Greek roots meaning “falling to death,” “anastasis” means the opposite, “rising to life.” Knowing more about this process could eventually lead to ways to enhance it, Montell says, which could be a boon for conditions in which apoptosis occurs to excess. On the other hand, identifying ways to reduce or prevent anastasis could be useful for averting the development of resistance to chemotherapy or other conditions where cell survival is harmful.

By helping cells live or die, she adds, researchers might eventually help people get back to their own healthy lives—an awfully big adventure in itself. *