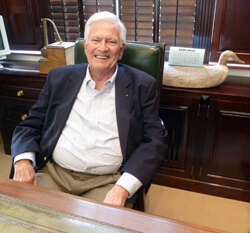 A. Everette James Jr. got his first taste of waterfowl hunting on Maryland’s Eastern Shore in the early 1970s, when he was an associate professor and director of the School of Medicine’s radiological research laboratories. He was enchanted by the decoys that are used to lure live birds within shooting range.

“They looked like floating folk sculpture to me,” recalls James, who went on to become head of radiology at Vanderbilt from 1975 to 1992 and founder of its Center for Medical Imaging Research. “When I found out that they used these beautiful objects to throw in the water and hunt; and people abused them, broke them and burned them; let them float away; stole them. I mean, the attrition rate.”

Indeed, it is precisely that attrition in wooden waterfowl decoys—the finest of which were hand-carved and painted between the late 19th century and middle 20th century—that has made them so prized by connoisseurs of American folk art. (To date, the highest auction price for a decoy has been the $856,000 fetched in 2007 for a red-breasted merganser hen, carved by Lothrop Holmes.)

While at Hopkins, James began collecting decoys and foresaw the likelihood that fakes were bound to flood the marketplace. His solution? Use radiography as a noninvasive, sensitive method for documenting a decoy’s condition, age, and authenticity. Beginning his X-raying of decoys at Hopkins, he continued the practice at Vanderbilt.

James has used Sherlockian precision to determine the significant things to look for in decoy X-rays: invisible fractures or hairline cracks; the extent and distribution of old paint; the age, condition, and placement technique used for such “internal hardware” as the nails used to affix the decoy’s head and neck to the body and the weights for steadying it upright in the water.

The X-rays even can determine if fabricators have used intentionally rusted nails to make bogus decoys look old, he notes, since “the rust will be located at the entry as it will have been sheared from the surface of the nail when it was positioned.” A well-known decoy-maker’s use of nails also can be as distinctive as a signature, he adds.

Now 74, James doesn’t X-ray that many decoys these days but is happy to review and analyze X-rays sent to him by others. His own collection of decoys has dwindled since he and his wife, Nancy Jane Farmer, began donating their extensive collection of folk art—including paintings, quilts, and pottery—to museums, among them the St. James Place Museum that they created by restoring a 1910 Baptist church in his hometown of Robersonville, North Carolina.   NAG