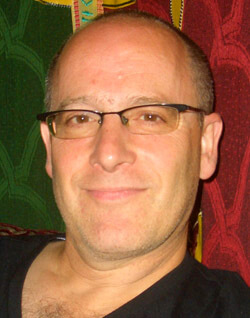 A graduate of the Rhode Island School of Design, illustrator James Steinberg (cover image) has done work for book and CD covers, and for a wide variety of newspapers and magazines, including Time, The New York Times, Forbes, Fortune, The Wall Street Journal, and Reader’s Digest. In 2001, he designed a postage stamp for diabetes research. Steinberg is based in Amherst, Mass.

Illustrator Nigel Buchanan (“The Last Word,” p. 24) works out of a large warehouse in Sydney, Australia, with a bunch of other artists. A lecturer in illustration and design at Australian colleges, Buchanan’s clients include Money Week Paris, The New York Times, MTV, and The Radio Times in London. He is the recipient of a silver medal from the New York-based Society of Illustrators.

is a freelance writer and farmer who lives in New York's Finger Lakes. She's reported on the politics of federal funding for stem cell research, the role of folic acid in fetal development, and the ethics of disclosure among genomic investigators and the people who participate in their studies. Her most recent story for this magazine examined the role of race in quality of care in the emergency department.