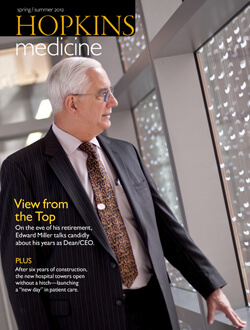 As an applicant for the Class of 1955, I was interviewed by Dean Chesney. I’d been forewarned that if the Dean raised his hand to his ear, that signified that he’d heard enough and was turning off his hearing aid! But no one told me what that meant.

Sure enough, as I waxed eloquent about how I had been inspired to pursue medicine after reading in Microbe Hunters about Metchnikoff’s theory that lactobacillus protected the gut against pathogens, Dr. Chesney arose and strolled over to the window, where he raised his hand to his ear. Taking this as an ominous sign, I concluded my remarks and withdrew, and was doubly relieved when I was later informed that I’d been admitted.

Dr. Mountcastle states that Dr. Chesney’s one major fault was not accepting federal funding [Annals, Spring/Summer 2012], but then describes him as being highly opinionated and never laughing. This amused me because Dr. Chesney struck me, at least in his later years, as a reassuring father figure—in contrast to the then young Dr. Mountcastle who was, at least for us med students, a brilliant but humorless and decidedly fearsome presence!

It even seems likely that Dr. Chesney was quite aware of the story about turning off his hearing aid during interviews, and just did it to satisfy his young interviewees … and maybe display his quiet wit!