Archives - Who's traversing the tract? 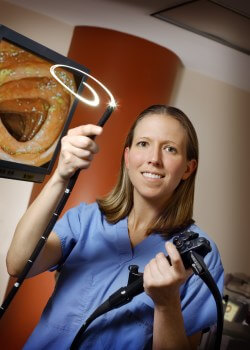 275. That’s the average number of colonoscopies it takes for a GI fellow to “reach minimal cognitive and motor competency” to do them, according to a study out this spring in Gastrointestinal Endoscopy. The article goes on to suggest that the bar for mastering colonoscopies should be moved even higher.

Hitting high volumes has seldom been a problem at Hopkins, as an academic center with a seamless supply of colonoscopy patients. And it’s certainly not a drawback for Monica VanDongen, who has performed hundreds in the two years since she began her training and clinical practice in the Department of Gastroenterology and Hepatology. At Hopkins and elsewhere, the young woman is unique: VanDongen is a nurse practitioner who completed a one-year, intensive medical fellowship in gastroenterology.

Now she and those who follow her bring hope of easing a clinical problem that’s all too obvious, says department director Tony Kalloo: “Thousands of people are not getting screened for colorectal cancer because of manpower shortages. It’s reasonable, then, to raise the number of capable providers for that procedure,” he notes. Yet, at the same time, reimbursement for colonoscopies is going down. “If we’re all dedicated to saving health care costs while not compromising patient care,” says Kalloo, “doesn’t this solution make sense?”

VanDongen’s skills are proven. Because of her unusual status as a nurse-practitioner colonoscopist, her work has been monitored more than most. “The audits are especially necessary because the American Society of Gastrointestinal Endoscopy has essentially no data to support non-physicians in this new role,” she says.

A recent review noted VanDongen’s  94.6 percent success rate for cecal intubation—the sine qua non of traversing the tract to the cecum. Kalloo describes her detection of precancerous adenomas—0.43 per colonoscopy—as “wonderful.” And her ability to complete the procedures and do them within the recommended time—a sign of skillful maneuvering—is well above the national average.

“My great worry when I began the training was about working alongside the medical fellows and being accepted by them,” says VanDongen. “As a nurse practitioner, I expected some resistance, but it wasn’t there.”

Departmental reviewers are so pleased with the new venture with Hopkins’ School of Nursing that two more fellows are in training.

As for VanDongen, she’s finishing a doctoral degree and its required clinical research. Struck by the apparent benefits of having patients prepare for a colonoscopy both in the morning and the night before it, she’s been integrating the split prep into her practice. “You’d think, intuitively, that the longer a patient goes without eating or drinking, the better,” she says. “But bilious material builds up with time, especially on the right side of the colon. The morning dose of irrigant acts as a final flush of those secretions.”

Meanwhile, VanDongen continues an active practice, both with clinic patients and with those in a colorectal screening program for underserved people who live near Hopkins.