Archives - Then and now 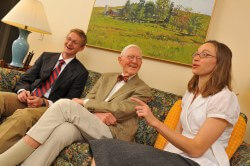 Talk to any Hopkins Med graduate from the 1940s or 1950s and you’re likely to hear stories of a homier medical school with a straightforward curriculum and fewer rules. But has the true essence of the School of Medicine changed? To find out, we sat down with 86-year-old Bill Fritz, who earned his Hopkins MD in 1949, and two of his grandchildren, Lia Clattenburg Tron, who graduated from the School of Medicine in 2007 (and is now finishing an anesthesiology residency here), and Lia’s brother Eben, who’s entering his second year at the medical school.

First some background: When 19-year-old Bill Fritz, fresh from the U.S. Navy, came east to Baltimore from Oshkosh, Wisconsin, in 1945, the Johns Hopkins that awaited him was alive with excitement. The war was over and medicine was undergoing a metamorphosis as physicians returned from the front with exciting clinical innovations. Fritz’s introduction to medicine under the tutelage of some of the foremost physicians in the world turned him into a Baltimorean. He completed his internal medicine residency here and practiced locally until 1991. As he and his grandchildren gathered in his living room recently with writer Marlene England, they compared notes on their experiences as Hopkins med students.

Bill, what brought you to Johns Hopkins all the way from Wisconsin 66 years ago?

Lia: But you were far from your family, weren’t you? That must’ve been hard.

Eben: Yes, where did you go for Thanksgiving?

Bill: I went home—on the train. It was a long ride.

Is the daily routine for a medical student today at all similar today to the one of six decades ago?

Bill: We went to school all day, came back late in the afternoon, played a game of bridge or a little pool. I finally had to go to the library to study. There were too many distractions in the Pithotomy Club where I lived.

Eben: So you were just in lectures all day?

Bill: In the beginning, it was labs, then all lectures third and fourth year.

Lia: In my second year, school started at 8 am, then an hour lunch break, then class until 5 pm. One or two afternoons a week, we’d have small group sessions or something outside the classroom. But that was the old curriculum. For Eben, it’s a whole new curriculum. Our grandfather had half a year of anatomy. I had nine weeks, and Eben has seven.

Eben: Anatomy was my first class in the new Armstrong Building. The structure is so well ventilated you couldn’t smell anything during the class—not like the old-time experience.

Bill: In my day, four of us worked on cadavers in this dingy dark building. The surroundings were grim, and the smell of formaldehyde … well, it wasn’t very uplifting.

Have you seen the new campus? Bill: Eben has taken me through. I would have loved a physical setup like the Armstrong Building. Ours was really dingy and old. Of course, most of the buildings from when I was a student are no longer there. The entrance has changed three times.

But has teaching itself changed?

Eben: They use a lot of different ways to teach us now. I wouldn’t have been very good with all those straight lectures like my grandfather had. It’s tough to stay focused. So we have an hour or two of lecture, then there’s team-based learning, for example, or small group sessions. Histology is integrated into all of our courses now, along with pathophysiology and physiology.

Do these updated methods sound strange to you, Bill?

Bill: No, they sound wonderful! Another thing that’s different is we only had one exam a year on everything, so you had no idea how you were doing. It was pretty horrible. I think the professors really knew how we were doing but didn’t tell us.

Tell me about the professors, then and now.

Bill: Our teachers—Dr. Alfred Blalock, John Eager Howard, and others—they were the shining stars of medicine, not only at Hopkins but in all medical schools. So when you were in their presence you felt like you were at the feet of icons.

Lia: Monday I was in John Cameron’s operating room and tomorrow I’m with Patrick Walsh. These are the giants of surgery that I know and work with, and I look forward to a career of saying I did cases with them. But I would also have loved to have been taught by those early legends of Hopkins Medicine.

Bill: I was scared to death of them.

Did they ever emphasize the patient-doctor relationship in your clinical courses, Bill?

Bill:  In third and fourth year, the people who taught us stressed that you should listen to your patients because they’d tell you what’s wrong.

Lia: For me, the clinical part wasn’t as integrated as it is now. Now it’s a major daily commitment.

Eben: Starting in anatomy, we learned how to do a physical exam. Then after Christmas, we were each paired up with a physician in the hospital. You’re there through your entire second year. The wonderful thing about it is that as we’re learning about pulmonology, for example, and we then see an asthma case, it makes sense. Everything is so fresh; it really helps our learning in the classroom.

Lia: I admire what Eben is going through. I think it’s harder.

Bill: I’m not sure I could’ve handled it.

Eben: Hands down, my grandfather had it the toughest.

Lia: Whenever I don’t sleep well and I know I need to go back on call, I think that in his residency in the 1950s he was never off call. So what do I have to complain about?

Bill: Well, that’s true that I was never officially off because you were always responsible, even when you weren’t there. I’m not sure it was really good because you were completely worn out. Now they have no more than 80 hours to work in a week.

How did you blow off steam in the old days, Bill?

Bill: There was this terrible place called the New Broadway Hotel on the corner. Friday nights, we went there—and there were a lot of fraternity parties, too. But it was always just a weekend thing.

How different were your living situations?

Bill: In my first year, I lived in a room on Collington Avenue where there was only one window and it was a skylight. But I never thought anything of walking to the hospital after dark from there. Starting my second year, though, I lived in the Pithotomy Club on North Broadway. I guess eight to 10 students lived there. The rest lived in rooming houses along Broadway or in fraternity houses. Of course, there was also the Hen House. That’s where female medical students lived.

Lia: I lived with my grandparents my first year. I’d come home and we’d have dinner. I had the nicest living conditions of anyone in my entire class.

Eben: I lived in Reed Hall. I think about 60 percent of the freshman class lived there. The Pithotomy Club sounds much better. And Lia, you could’ve gone to the Hen House.

Lia: I would not have wanted to be a female in a class back then!

Bill: There were only five women in my class. It was tough for them, but they all did very well. Actually the women were brighter than the men. The girls were very much a part of the class, even if they lived in the Hen House. And we had female instructors—Dr. Heinz, Dr. Oppenheimer. We really respected them.

Lia: And to think, now there are more women than men in the classes.

Didn’t certain traditions used to be a much-loved part of the medical school community—like the annual Pithotomy Show, which existed for almost 100 years and then disappeared?

Bill: Yes, we used to have that show once a year for three nights. It was very vulgar, but people couldn’t wait to come to it. H.L. Mencken came every year, most of the professors, too.  Another tradition was the Turtle Derby, but that disappeared for a period, too.

Lia: Now it’s alive and well and a fundraiser for the Children’s Hospital.

Eben: It used to be the house staff that organized the event. Now, it’s the med students.

Lia: My mother remembers going to the Turtle Derby with our grandfather when she was a child.

Has the process of choosing a specialty changed?

Bill: I just thought about what field I was most interested in and chose that as my specialty.

Lia: In every rotation I did, I could imagine myself doing that job—psychiatrist, surgeon, pediatrician— but anesthesiology took me by surprise. I signed on for a two-week rotation to fill a gap in my schedule, and it was one of my favorite things. I had a lot of mentors in internal medicine, so it was a big decision to steer away from that. I came and talked to my grandfather.

Compare the cost of your medical educations.

Eben: I could buy one very fancy car with what tuition costs today.

Bill: We lived on peanut butter.