Archives - The "invisible" injuries of war

The "invisible" injuries of war 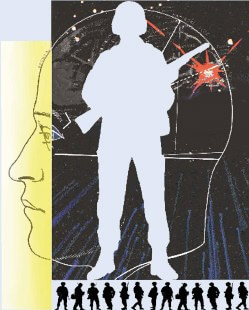 Wounded American soldiers are returning home to a nation not properly prepared to treat them, writes Ronald Glasser ’65.

About midway through his powerful new book summing up 40 years of military medicine from Vietnam to Afghanistan, Ronald Glasser displays a gem gleaned from one of his most treasured semesters as an undergrad at Johns Hopkins’ Homewood campus.

In the relevant passage, Glasser—who went on to earn his medical degree here in 1965 before serving as an Army surgeon during Vietnam’s bloodiest years—cites a prescient detail from Homer’s Odyssey: When Odysseus returned to his homeland after a long battering in the Trojan War, the legendary soldier looked around and wondered aloud at the strange faces that surrounded him: “Who are these people whose land I have come to.”

In the modern view of war’s long-term effects, Glasser writes in Broken Bodies, Shattered Minds, Odysseus displays what we now call post-traumatic stress disorder: “Those feelings of Odysseus, of no longer belonging, of reaching home and suddenly being a stranger in a strange land, are shared in some form by virtually every soldier who has been in combat and, upon returning home, is expected to think and act as they did before they were forced to kill or be killed.”

But while Glasser—who also authored the Vietnam classic 365 Days in 1971—acknowledges that various forms of “shell shock” and “battle fatigue” have likely always tormented combat’s seeming survivors, his masterful overview provides new insight into the distinguishing costs of our current conflicts. The signature wounds of our soldiers’ injuries in Iraq and Afghanistan, says Glasser, are concussions either caused or exacerbated by blast waves emitted by the powerful roadside bombs that chronically dog American combat patrols. Glasser draws a facile link between the recent tallies of documented roadside bomb injuries up through 2010—300,000—and the number of confirmed diagnoses of PTSD: 320,000.

“They’re blowing us up, not shooting us,” Glasser says from his long-established civilian posting in Minneapolis, where he continues to care for Minnesota’s National Guard units rotating in and out of Iraq and Afghanistan’s most hellish battlefields. Though blast wave injuries from detonating explosives have existed since the dawn of gunpowder, modern armor and tactics have shifted the ratio in favor of survival, Glasser explains. Consider: In Vietnam, one American soldier died for every 2.4 casualties; in Iraq and Afghanistan, one soldier dies for every 16 casualties.

But this higher “survival” rate masks a more menacing reality, says Glasser. These “invisible injuries,” he says, “are not perceived as actual damage.” With concussions and their concomitant traumatic brain injury, he explains, too many returning soldiers look okay but “just don’t think clearly. They’ve lost executive function.”

New imaging technology, in the form of tensor MRI, is increasingly available to detect the previously unseen diffuse axonal injuries in soldiers. This technology is documenting new cases of mild traumatic brain injuries, confirming thousands more cases that might have previously gone untreated. Still, says Glasser, too few VA hospitals have this latest equipment, “and no one’s awarding purple hearts for mTBI or PTSD.”

Further complicating the care picture, Glasser reveals the previously little-known world of female combat injuries. In all of Vietnam, he says, only one female soldier was killed. Now, with more and more military roles filled by women, more than 300,000 female soldiers—27 percent of our active duty military—have served in Iraq and Afghanistan.

But with female soldiers’ dramatically increased exposure to combat, they’re also paying an unprecedented price: About 700 female American soldiers have been killed in Iraq and Afghanistan so far, and a full 30 percent of all women soldiers deployed come back with injuries. Stateside medicine isn’t always ready for them. Because the average female soldier weighs just 125 pounds, for example, some with missing arms have had to settle for hooks instead of the more advanced prosthetics.

Accounting for these more modern wages of war—both in actual lifelong medical care and the long-term compromise to individual soldiers’ life quality—requires a new calculus on the part of Americans and their political leaders, notes Glasser.

“We have no choice,” he says. “We have to take care of the wounded and their wounds.”