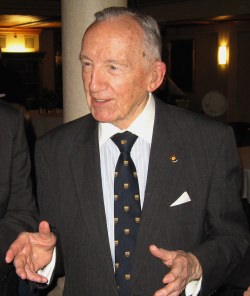 Possessed of a smooth baritone voice, a mind-boggling vocabulary, and a stately yet wryly humorous demeanor, pioneering cardiovascular surgeon C. Rollins Hanlon ’38 “could give a speech that would leave an audience spellbound,” recalls Robert Johnson, chair of the Saint Louis University (SLU)department of surgery and holder of its C. Rollins Hanlon Endowed Chair.

“Afterward, everyone would have to grab a dictionary to figure out what he said,” Johnson remembers.

Hanlon, first head of the SLU department of surgery, led it from obscurity to prominence between 1950 and 1969, then became director of the American College of Surgeons before retiring in 1986. He died on May 3 of lymphoma at the age of 96. Among his survivors are his wife, pediatric cardiologist Margaret Hammond Hanlon ’44, and son, anesthesiologist Philip Hanlon ’75.

After graduating from Hopkins, Hanlon served his surgical residency at Cincinnati General Hospital and was a fellow in surgery at the University of California in San Francisco. Following naval service in the China-Burman-India Theater during and after World War II, including duty on the hospital ship Repose, he returned to Hopkins—only to be persuaded by the president of SLU and its medical school dean to move there a few years later.

Among the first cardiac surgeons to perform coronary bypass grafts, Hanlon brought open-heart surgery to the area and created a regional research and clinical center at the university for the study and treatment of cardiac conditions. He led a 12-person team in performing the first open-heart surgery in the lower Midwest. His research also led to the region’s first human heart transplant.

Despite his long association with SLU, Hanlon remained devoted to Hopkins. The Alumni Association gave him its Heritage Award earlier this year.