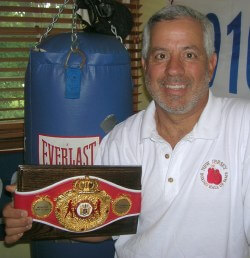 Coletta has been top doc at 2,000 prize fights.

For Domenic Coletta Jr. (H.S., emergency medicine, 1983-85), boxing is a fascinating, compelling sport—but it’s the injuries associated with it that engage his professional interest.

For the past 23 years, he has served as the ringside physician in more than 2,000 prize fights, almost all of them fought in Atlantic City, N.J., where he has been an emergency room practitioner since completing his Hopkins residency. Recently, he became director of emergency medicine at Cape Regional Medical Center in Cape May County, N.J., where he’s practiced for 20 years.

As a highly respected physician poised to react swiftly should any major medical trauma occur on the region’s boxing canvases, Coletta has stood beside the ropes at many major fights, including battles between Evander Holyfield and George Foreman, Oscar De La Hoya and Wilfredo Rivera, and Arturo Gatti and Micky Ward. His devotion to safe fisticuffs has earned him election as “Ringside Physician of the Year” by the American Association of Professional Ringside Physicians, as well as induction into the New Jersey Boxing Hall of Fame.

Coletta performs pre- and post-fight physicals on the boxers and requires all fighters to pass a series of medical tests before competing. In addition, there are EMTs and an ambulance present during the bouts. Over the years, Coletta estimates that he has stopped between 75 and 100 fights.

Asked about calls to ban boxing, largely due to concerns about traumatic brain injury, Coletta says, “Boxing is one of the oldest sports known to man, and it’s not going to go away. If you ban it, it’s just going to happen, unsupervised, in back alleys and in bars. If you keep it legitimate and keep it legalized, then there’s definitely a place for medicine. Ringside medicine is what keeps boxing from going back into the barbaric ages when it was more dangerous.”