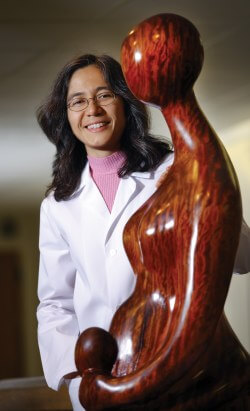 Lili Barouch has been following a group of women long term who’ve had peripartum cardiomyopathy.

Lili Barouch first met Amanda Heath at The Johns Hopkins Hospital in 2007 just after Heath had given birth to her first child at full term by caesarean section. Barouch, a heart failure specialist, quickly became part of Heath’s care team. The 27-year-old was very short of breath, her feet were extremely swollen, and her ejection fraction had plummeted to a mere 25 to 30 percent.

“Her condition,” says Barouch, “fit the definition of peripartum cardiomyopathy,” the heart failure of still-unknown cause that occurs near the end of pregnancy or in the first months following delivery, more commonly among women who’ve had previous pregnancies or when women are carrying twins or triplets. In the vast majority of patients, it occurs within a couple of weeks before or after delivery.

After confirming the diagnosis with echocardiography, Barouch prescribed enalapril and propranolol to support her heart function while she was nursing, as well as diuretics to relieve her fluid buildup. Heath was feeling much better within a month. When Heath stopped breastfeeding, Barouch switched her to another beta blocker, metoprolol XL, because it is taken only once daily, and she continued with the enalapril.

The specific treatment depends on whether the patient is still pregnant or is breastfeeding. “For example, ACE inhibitors can’t be used during pregnancy because they have been associated with fetal complications and malformations,” Barouch explains, “but some of them are safe during breastfeeding, after the baby is 4 weeks old.”

The prognosis is generally good, especially compared to other forms of cardiomyopathy. Many women recover most or all of their heart function over several months to one year.

Six months after the birth of her baby, Heath’s heart function had fully recovered. She was weaned off the medicines after one year. Later, she had an important question for Barouch: Would it be safe to become pregnant again?

As recently as a decade ago, there was very little data about the risk either to the mother or baby of subsequent pregnancy after peripartum cardiomyopathy. After all, the condition is relatively rare, affecting 1 in 4,000 to 5,000 pregnancies. It has become evident, however, that the risk of a subsequent pregnancy for the mother’s heart depends on whether—and how soon—her heart’s pumping ability returns to normal.

“It’s never going to be absolutely safe,” Barouch says. “There will always be a risk of having cardiomyopathy again. Patients who are considering another pregnancy need to have their heart function come all the way back to normal. Otherwise, the chance of losing even more heart function is significant.”

To assess that, Barouch orders a stress echo, and if the response is normal, she gives patients a “cautious green light,” then monitors them very closely, especially toward the end of the pregnancy. The type of delivery must also be considered. Barouch explains that a caesarean section puts more stress on the heart because “the amount of fluid shift during a caesarean section is much greater than during a normal vaginal delivery, and if the heart is not working properly, the fluid can easily get into the lungs.”

And what is the impact on the baby? As long as the mom has adequate oxygenation and blood circulation, Barouch says, the baby should be OK.

One month after receiving that cautious green light from Barouch, Heath was pregnant with her second child. Her heart function remained normal, and this past January, she had another healthy, full-term baby boy.