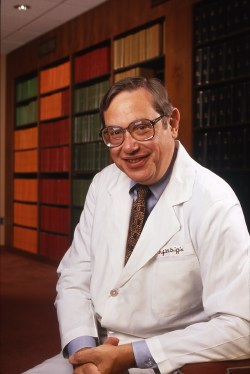 Griffin was a leader in the study of Guillain-Barré syndrome and other nerve disorders.

Jack Griffin was so highly regarded as an expert in peripheral nerve disorders, and so extensive was his influence in the study of axons, the nerve fibers that conduct electrical impulses, and the Schwann cell, which covers and protects axons, that early last January, a two-day symposium was held in his honor, titled “The Friends of the Axon, the Schwann Cell, and Jack Griffin.”

The large gathering featured an international galaxy of top scientists in these fields. Among those who spoke glowingly of Griffin while describing their own latest research included faculty from the universities of Dusseldorf, Heidelburg, and Glasgow, as well as from Harvard, the University of Pennsylvania, the University of Massachusetts, Emory, New York University, the Cleveland Clinic, the University of Michigan, the University of California San Diego, Hunter College, and Hopkins.

Despite a long battle against bladder cancer, Griffin was in great spirits and eagerly took part in all the discussions, vividly displaying one last time what a brilliant and engaging scientist he was.

Griffin, founding head of the Johns Hopkins Brain Science Institute, and former director of the Department of Neurology, died on April 16. He was 69.

A leading figure in studies of Guillain-Barré syndrome, a disease in which the immune system attacks nerves, leading to rapidly evolving paralysis of the legs, arms, face, and breathing, Griffin began his four-decade Hopkins career as a neurology resident in 1970. He ultimately earned professorships in neurology, neuroscience, and pathology.

Griffin served as head of the Department of Neurology and neurologist in chief of Hopkins Hospital from 1999 to 2006. He oversaw the expansion of what already was the country’s largest neurology critical care unit to a 22-bed facility for the treatment of patients with severe strokes or traumatic brain injuries, intractable seizures, and gunshot wounds, as well as those requiring recuperation from significant brain or back surgeries. He also was a much-admired teacher, earning the School of Medicine’s Professors Award for Excellence in Teaching.

In 2004, he and his wife, Diane Griffin, an eminent virologist and professor of both medicine and neurology, became what is believed to be the first husband-and-wife team in the history of Hopkins Medicine to be elected to the National Institute of Medicine in the same year.

Ill health compelled him to step down from the neurology directorship, but he recovered and became director of the Brain Science Institute in 2007. That same year he received the Johns Hopkins Heritage Award for outstanding service to the university.

A prolific researcher, Griffin published more than 300 studies in scientific journals, edited major textbooks on peripheral neuropathies, and was editor of the neurological journal Nature Neurology. As a mentor, he trained more than two dozen postdoctoral fellows who have gone on to distinguished careers around the world.