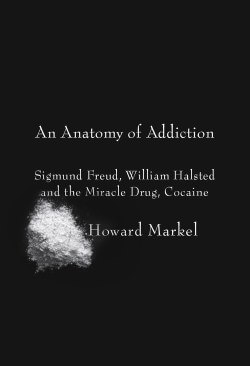 As an intern and resident at Hopkins from 1986 to 1993—and holder of a 1994 Hopkins PhD in the history of medicine—Howard Markel long has known one of the most well-established nuggets of Hopkins Medicine lore: that quirky but brilliant William Halsted (1852-1922), first professor of surgery and first surgeon in chief of Hopkins Hospital, was a cocaine and morphine addict.

What Markel shows dramatically—and sympathetically—in Anatomy of Addiction is that Halsted certainly was not alone. Many physicians became hooked on these drugs as a result of self-experimentation.

Halsted first injected cocaine in 1884 to test its anesthetic properties. Earlier that same year, another equally influential future medical giant, Sigmund Freud (1856-1939), also became a cocaine abuser, first testing its possible use as an antidote to morphine addiction. Not only did an untold number of lesser physicians similarly become enmeshed in cocaine’s coils, so did a surprising roster of prominent individuals.

In an era when “there was no such thing as ‘controlled substances,’ let alone illegal drugs,” cocaine, morphine, and other potent narcotics were key ingredients in various elixirs and pills “found in virtually every hospital, clinic, drugstore, and doctor’s black bag,” Markel notes.

Freud wrote freely about his cocaine use—until the drug’s deleterious nature became apparent. Halsted’s addiction was a closely guarded secret, only revealed directly decades after his death with the 1969 posthumous publication of Sir William Osler’s monograph, “The Inner History of the Johns Hopkins Hospital.”

A pediatrician and exceptional medical historian with both wit and style, Markel has produced a scrupulously researched, meticulously detailed account of the history of cocaine, as well as the drug dependencies of Halsted and Freud. “Cocaine no more explains the sum total of their lives and occupational achievements than a diagnosis of diabetes or hypertension would define others,” he writes.

Debate continues over whether Halsted rid himself of cocaine and morphine use. Markel weighs the circumstantial evidence judiciously and concludes that he did not. The physical and psychological toll on him surely was immense.

Freud “somehow escaped” his cocaine addiction, but he couldn’t shake his ultimately fatal dependence on the 20 or more cigars he smoked daily.

American humorist and author Mark Twain once wrote, in Following the Equator, “Faith is believing what you know ain’t so.” That observation could be an apt summary of the epiphany reached by Jonathan Dudley, a third-year student in the School of Medicine and graduate of both evangelical Calvin College and Yale Divinity School. After closely researching the key political pronunciamentos of the evangelical Christian church in which he was raised, he has come to the conclusion that they just “ain’t so.”

In his church he learned “that abortion is murder; homosexuality, sin; evolution, nonsense; and environmentalism, a farce.” Now “racked with ambivalence toward the evangelical community,” Dudley writes in Broken Words that the supposedly Bible-based positions maintained by evangelicalism’s leadership and most of its followers on what he calls these “big four” social issues really are not grounded in what Scripture says.

Dudley’s potentially controversial book is cleanly, persuasively written and based on in-depth theological and historical scholarship.  He found that “biases and prior beliefs are behind every interpretation” of the Bible made by evangelicals.

For example, he contends that no biblical passage or learned commentary on it can be cited as definitively stating that life begins at conception; indeed, the contrary is true. During the supposedly idyllic, “traditional” past to which the evangelicals refer, be it biblical times or the Victorian era, abortion was legal and deemed acceptable to save the life of the mother. Other conclusions: The anti-homosexual citations in Scripture are akin to its culturally based prohibitions against long hair on men or its insistence that women be submissive.

Like all texts, Dudley writes, “the Bible is malleable and can be made to say just about anything to suit the political interests of its interpreters, with a de-emphasis on some verses here…and an emphasis on other verses there ….

Dudley has not lost his religious faith. He believes, however, that the Christian Right “has done more harm than good in the political sphere, that it has rallied behind beliefs that are untrue and supported policies that hurt others.”

He hopes that others like him will “break ties with today’s evangelical culture…and start a new kind of evangelical Christianity…that embraces sound science.”