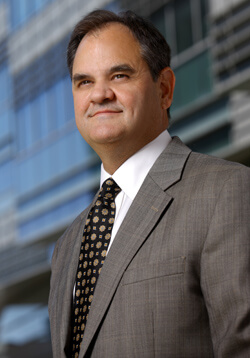 With Hopkins maintaining its long distinction as the recipient of the most National Institutes of Health research grants—and hundreds of millions in research projects currently under way—there was no time to waste in finding a successor to Chi Van Dang ’82 when he decided in June to end his nearly dozen years of service as vice dean for research (and three decades at Hopkins) to become director of the University of Pennsylvania’s Abrahamson Cancer Center.

King, the David Marine Professor of Medicine and Biological Chemistry and director of the Division of Pulmonary and Critical Care Medicine since 2005, is acclaimed for his own research on the regulation and function of aquaporin water channel proteins—work he began during his fellowship years, studying with 2003 Nobel laureate Peter Agre ’74, who discovered aquaporins.

King actually began his academic career as a historian; the Lexington, Ky., native attended Wake Forest on a football scholarship, receiving his undergraduate degree in history in 1982. He earned his medical degree in 1989 from Vanderbilt, came to Hopkins in 1989 as an intern in the Osler Medical Service, and then transitioned into resident and assistant chief of service. After joining the faculty in 1997, he rose through the ranks to become a full professor in 2010.

As a physician-scientist, King has made substantial contributions to our understanding of the biology of aquaporin channels, which play a critical role in controlling the water balance in different organs and cells. He has made novel observations about the physiological role of aquaporins in humans, and his research group has developed new insights into the healing mechanisms underlying acute lung injuries. Every year, roughly 200,000 people nationwide suffer from an acute lung injury that requires mechanical assistance, says King, and 75,000 people die from those injuries. “We hope to identify new therapies to accelerate their resolution,” he says.

In the post of vice dean for research, he will oversee the offices for research administration, policy coordination, and technology transfer; explore funding opportunities for interdisciplinary research; and create an environment conducive to innovative and collaborative inquiries. His job is to ensure that Hopkins has state-of-the-art research facilities and policies that foster the advance of basic research discoveries to the marketplace and bedside.