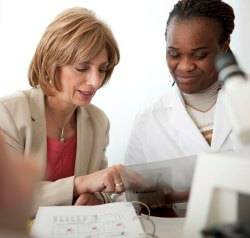 A veteran researcher tells why she’s proud to lead the National Heart, Lung and Blood Institute.

After three decades at Case Western Reserve University, where she conducted extensive research in pediatric hematology-oncology, sickle cell disease, and homeostasis, Susan Shurin ’71 moved East in 2006 to help lead the funding agency that had been supporting much of her work. “There are some things you can do hands on and some things that you can’t affect adequately without being in a leadership position,” she explains of her decision to become deputy director of the NIH’s National Heart, Lung and Blood Institute (NHLBI).

Three years later, when Elizabeth Nadel retired as the NHLBI’s director, Shurin stepped up as acting director—a post she’s now held for two years. “I think I get a longevity award for that,” says Shurin with a chuckle. She chooses not to become a candidate for director but is happy to be an indefatigable steward of the NHLBI’s multifaceted activities and its $3 billion research portfolio.

Shurin also cites the Institute’s leadership in supporting research—much of it at Hopkins—“that has transformed the outcome of sickle cell disease,” which almost always had been fatal; and in treatments for newborns, asthma, chronic pulmonary obstructive disease, and in transfusion medicine practices. “We try to be very strategic in the research that we support,” she says.

Shurin, who joined the staff of Case Western several years after completing her Hopkins residency in 1972, served for 16 years as director of pediatric hematology-oncology at Rainbow Babies and Children’s Hospital, and also served as director of pediatric oncology at the Case Comprehensive Cancer Center. From 2002 to 2004, she was vice president and secretary of the Case Western Reserve Corporation. Her long career in fostering the application of new discoveries to medical treatment earned her the Johns Hopkins University Alumni Association’s Woodrow Wilson Award in 2010 “for distinguished government service.”