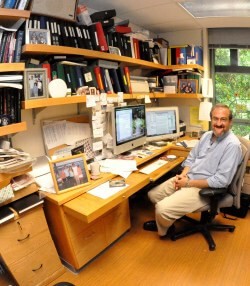 Mark Schlissel will scale back his research in his new role.

A dozen years have passed since Mark Schlissel ’83, PhD ’86, left Johns Hopkins. Yet he still thinks “fondly all the time,” he says, of the place where he earned his MD and a PhD in physiological chemistry. He served on the house staff in internal medicine, taught in the departments of both Medicine and Molecular Biology and Genetics, and ran a research lab. He’s continued to be engaged, serving last year on a committee that visited the Krieger School of Arts and Sciences and offered then-new Hopkins president Ronald Daniels advice about future leadership and directions.

Schlissel’s wisdom and experience in academic matters (until recently, he served as dean of biological sciences in the College of Letters and Science at the University of California–Berkeley) caught the eye of Brown University, which last spring tapped him to become its 11th provost. As the chief academic officer of the 247-year-old institution, Schlissel ranks second only to its president and is the one to whom all the university’s deans, directors, and vice presidents report. He began work July 1.

Schlissel, whose research had led to a detailed understanding of the genetic factors involved in the production of antibodies and how mistakes in that process can lead to leukemia and lymphoma, will be curtailing his laboratory work. “Given the fact that one can only work so many hours a day, I’m going to scale back my research program in the coming years and focus on helping Brown expand its influence and enhance its mission,” he says.

Schlissel’s own rise up the academic ladder comes as no surprise to his closest associates, both those formerly at Hopkins and those who are still here. He says that David Hellmann ’77, now vice dean and director of medicine at Johns Hopkins Bayview, was “one of my very influential clinical professors”; and Robert Siliciano ’78, PhD ’83, a professor of medicine and director of the MD/PhD program, and Antony Rosen, now chief of rheumatology, were good friends. Other close mentors included former Carnegie Institution director Donald Brown; Hopkins’ former director of molecular biology and genetics Thomas Kelly ’65, PhD ’68, now head of the Sloan-Kettering Institute; former director of Hopkins cell biology department Thomas Pollard, now dean of Yale’s graduate school of arts and sciences; and John Stobo, former director of medicine at Hopkins, now senior vice president for health sciences and services at the University of California.

Although Schlissel admits that he didn’t exactly relish exchanging the balmy Berkeley weather for Rhode Island’s winters, he says: “I’m the kind of person that if I’m happy at my job and with my colleagues, it doesn’t matter whether I’m in the San Francisco Bay area or East Baltimore or anywhere else. So I’m not moving for the waters, as they say.”