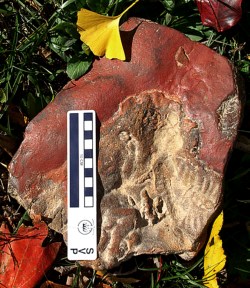 A baby ankylosaur left its mark.

Scientists look to antiquity for insights into modern human anatomy.

After the publication of his book Dinosaurs of the East Coast, Hopkins’ David Weishampel received a call from an enthusiastic paraprofessional paleontologist who lived in College Park, Maryland. Ray Stanford claimed to have a room full of dinosaur footprints available for study. When Weishampel arrived he found a whole house full of fossils and ichnites (fossilized footprints). The rocks were piled in heaps so tall that the floors of Stanford’s home had needed iron reinforcements. All the fossils had been collected from the area.

“Ray’s house was a treasure trove,” recalls Weishampel. “He had jumbles and jumbles of dinosaur footprints and other fossils all over the place, and then he showed me this thing in a case—I could tell right away that it was the imprint of a baby nodosaur, a kind of armored ankylosaurian dinosaur that together are known from the Early and Late Cretaceous times, 145 to 65 million years ago. It was on its back, and much of its body was imprinted along with the top of its skull.”

The imprint, which Stanford, Weishampel, and Hopkins’ Valerie DeLeon analyzed in September’s Journal of Paleontology, was all in a day’s work for the scientists at Hopkins’ Center for Functional Anatomy and Evolution. Scientists within the center (five faculty researchers and 11 graduate students) are working hard to uncover the details of human and other animal life in antiquity. “We’re one of the only places on campus geared toward investigating whole organism anatomy and physiology,” says center director Chris Ruff, who studies the skeletons of ancient humans in order to find out how they lived and adapted to their environments.

Anatomy is the scientists’ passion, and the faculty members spend each fall imparting that passion to a new class of first-year medical students. Along with teaching Human Anatomy, they also share insights into evolution and biomechanics in classes for advanced students and residents—insights garnered from extensive time spent in the field. “Our research surely benefits from our knowledge of human anatomy, and our exposure to the anatomy of a broad array of creatures provides insights that would not be possible from knowledge of human anatomy alone,” says Ken Rose, professor of anatomy. “Mammalian groups you’d never think of might give you ideas about some unusual feature in the anatomy lab. That’s what we instill in our students.”

And then, of course, there are the dinosaurs. The research techniques and resources of the center proved invaluable to Weishampel’s investigation, which used a computer analysis to identify the baby dinosaur as a new nodosaur species, the youngest ever found—not to mention the only dinosaur hatchling ever uncovered in the eastern United States.