Archives - When the Match is Half Full

When the Match is Half Full 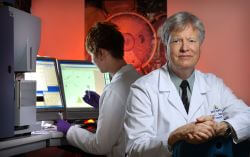 Richard Jones and colleagues have pushed the boundaries for patients in need of a bone marrow transplant.
photo by Keith Weller

For years, bone marrow transplants have proved their mettle as a remarkably effective way to treat—even cure—certain types of cancers and genetic diseases.

But the healthy donor tissue needed for the transplants has had to closely match the patient’s tissue. Absent that match, the body’s immune response gears up to reject the new tissue, or the new healthy tissue can attack the recipient in graft-versus-host disease (GVHD).

Complicating the situation even further, finding a proper match could take months, which is time that most patients who need a transplant don’t have.

Today, however, new research here is making it possible to transplant tissue that isn’t a close match, without launching the potentially deadly side effects that would have been a risk only a few years ago. “Patients up to age 75 now have nearly a 100 percent chance of finding a match,” says Richard Jones, director of Hopkins’ Bone Marrow Transplant Program.

In the past, donor and patient tissue had to have in common all 10 of the human leukocyte antigens that indicate the likelihood of tissue rejection or GVHD. But even in siblings, there’s only a 30 percent chance that all these protein markers will match. And though millions of potential marrow donors have signed on with international registries, the chance that a patient of northern European descent will find at least one nearly complete donor match is still only about 50 percent to 60 percent. For some ethnic groups, the odds are much lower.

Using immunosuppressant drugs to stave off the recipient’s immune response has allowed physicians to transplant tissue from donors with as few as half the protein markers being a match. The problem: This approach leaves already vulnerable patients immuno-compromised and at serious risk for other illnesses.

So Jones and his colleagues have put a new spin on the established practice of administering the anticancer drug cyclophosphamide in high doses before a transplant. “Cyclophosphamide has been the most commonly given drug before bone marrow transplants because it has a powerful antitumor effect, and it is also a powerful immunosuppressant,” says Jones.

“Now we also give cyclophosphamide after the transplant.” This strategy takes advantage of the time when the T-cells lining up to attack the mismatched tissue are especially vulnerable. And not only does post-transplant administration of cyclophosphamide target the problem T-cells, it doesn’t wipe out the whole immune system in the process.

Oncologists at Johns Hopkins have now completed about 250 of these half-matched transplants, including, says Jones, about 65 last year alone—“the most anywhere in the world.”