Patz was a pivotal figure in ophthalmology. 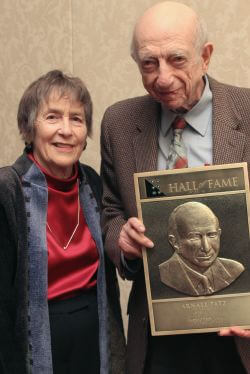 Patz and his wife, Ellen, at the White House on the day of his Medal of Freedom presentation.
Photo courtesy of the American Printing House for the Blind

Awarding Arnall Patz the Presidential Medal of Freedom in 2004, President George W. Bush called him “the gold standard in the field of researching the causes and treatment of eye disease.”

Patz, a modest man despite his remarkable achievements, demurred. “I could name 50 other medical scientists who probably deserve it more than I do,” he said of the nation’s highest civilian honor. He later added that getting the chance to meet golfing legend Arnold Palmer, who also received the Medal of Freedom that day, was as exciting as getting the medal.

Patz, director emeritus of the Wilmer Eye Institute; a pivotal figure in the history of ophthalmology; and the recipient of an Albert Lasker Award for his groundbreaking research into the causes and prevention of blindness, died in his sleep at his home in Pikesville, Md., on March 10. He was 89.

Patz‘s lifetime of contributions to ophthalmology included discovery of the cause of  retinopathy of prematurity (ROP), an affliction of premature infants that once was the most common reason for childhood blindness; and development of one of the first argon lasers used in the treatment of diabetic retinopathy and age-related macular degeneration (AMD).

A member of the Hopkins faculty since 1955; head of the Wilmer Eye Institute from 1979 to 1989; and an active professor emeritus since then, Patz was known for encouraging the work of young ophthalmologists who went on to become internationally acclaimed eye specialists.

It was while completing his residency in ophthalmology at the District of Columbia General Hospital that he observed that premature infants with severe ROP had also received high levels of oxygen. He found that the babies had an abnormal overgrowth of blood vessels in the eye causing irreparable damage to the retina, frequently leading to blindness. Patz conducted what many considered one of the first controlled clinical trials in American ophthalmology to test his belief that the excessive administration of oxygen to premature infants caused the condition.

Initially denied research money for his pilot experiments, he funded his first tests with money borrowed from his brother. Subsequent studies in collaboration with Everett Kinsey, a famed biochemist, confirmed Patz’s theory and led to a change in pediatric practices that subsequently saved the sight of countless infants.

Patz then studied ways to stop the leaking and overgrowth of blood vessels in the retina. Recognizing the potential of lasers to treat such problems, Patz developed the argon laser with the help of Hopkins’ Applied Physics Laboratory.