Emotional support is key when treating girls with rare malformation. 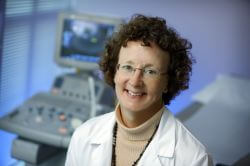 Almost all young women diagnosed with vaginal agenesis (the absence of a vagina) have never heard of it, and few pediatricians think to look for it. A congenital disorder of the reproductive system, it affects roughly one in 5,000 females. It occurs when the muscular canal connecting the cervix to the vulva stops developing.

“Girls who are 13 or 14 are shocked to find out they don’t have a vagina, and even more stunned if they learn they don’t have a uterus,” says Hopkins gynecologist Lisa Kolp. “They’re often angry and frustrated and wonder why they can’t be just like everyone else. That can lead to some intense, emotional ups and downs.”

Typically, the condition is diagnosed when a girl enters puberty and fails to begin menstruating. Those patients who retain a uterus may be treated first in an emergency room because of abdominal pain resulting from menstrual blood that is blocked. Patients without a uterus may be referred to a specialist like Kolp only after years of hormonal treatment don’t produce a period.

Kolp says vaginal agenesis is rarely detected at birth or in childhood. “Unless you’re looking for it—which most people aren’t, and most pediatricians don’t—it’s not usually picked up,” she says.

Although most gynecologists might see one case during their entire careers, the Hopkins gynecologist treats several each year, often from out of state. The neovaginoplasty she performs uses skin grafts taken from the buttock. After making an incision where the vagina would normally develop, the gynecologist inserts the grafts to create the canal. A balloon-like device is then put into place for seven days to keep the newly formed vagina open while it heals.

When the patient is discharged, she must use a tampon-shaped vaginal dilator to maintain the opening, initially removing, cleaning, and replacing it several times a day. During this phase of healing, Kolp sees her patients frequently, closely monitoring their progress.

Because of the amount of self-care required with this procedure, the gynecologist tries to delay such surgery until patients become sexually active in their late teens or early 20s. Intercourse should eventually be able to maintain the new vagina.

Kolp is also working on a device to facilitate the early stages of vaginal construction. With the help of a Hopkins biomedical engineer, she is developing a soft, hollow device that can be inserted after the skin graft heals and safely left in the new vagina for months at a time.

Such a stent would be particularly beneficial for some of her youngest patients, often referred via the emergency room. One of them, a 12-year-old from another state, was MedEvaced to Hopkins several years ago after another physician mistakenly attributed the blockage of her menstrual blood to an imperforate hymen. When the error was discovered during surgery, the patient was sent to Kolp.

“We did the procedure at an earlier age than I would have liked—at the beginning the girl  was so scared that she wouldn’t let us touch her or remove her Foley catheter—but we went ahead because her mom and aunts are nurses, and that gave her a skilled support system for afterwards,” Kolp says. “Now she has a functional vagina and is having normal periods.”