Archives - No Worse for Wear

No Worse for Wear 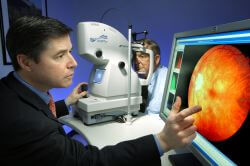 Bressler and colleagues used fluorescein angiography to tease apart a presumed case of cause and effect.
photo by Keith Weller

For years, it’s been thought that patients with both cataracts and earlier stages of age-related macular degeneration (AMD) presented the proverbial no-win situation: Operate to remove the cataracts and you risk accelerating progression of AMD.

Now, thanks to the results of an innovative study by Wilmer’s Neil Bressler and colleagues, ophthalmologists can feel far more sanguine about proceeding with cataract surgery in these patients.

To tease apart presumed cause and effect, Bressler—an AMD expert who heads the Wilmer Eye Institute’s Retina Division—and his group used fluorescein angiography to examine the macula in 86 patients with confirmed AMD just prior to cataract surgery. They also obtained images at one week, three months, and one year after surgery to document postoperatively any growth of new vessels (advanced wet AMD) that can cause further retinal deterioration and vision loss.

Cataracts and AMD can occur simultaneously, and because some wet AMD is very subtle, says Bressler, even with angiography, “physicians might miss it because the cataract blocks adequate visualization [of the retina].” That could help explain the “presumed progression” of AMD after cataract surgery, he notes.

The good news: Wet AMD developed in only three eyes at one year following cataract surgery when angiograms one week after cataract surgery had confirmed its absence—a progression rate of less than 5 percent. That’s within the expected rate from past studies and similar to that among patients whose other eye was not operated on for cataract during the same period.

Although the next step is to find a way to better determine existing wet AMD before cataract surgery, says Bressler, “we’re now more confident that cataract surgery doesn’t worsen AMD.”