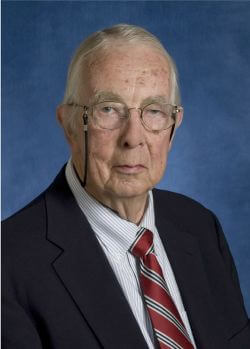 Imposing in stature, deep of voice, stern in demeanor (but with a subtle sense of humor), pathologist Grover Hutchins ’61, director of autopsy services at Hopkins Hospital from 1976 to 1998, simply couldn’t be stumped.

“No one in the country knew more autopsy pathology than Grover,” recalled Gary R. Pasternack ’75, ’78, one of Hutchins’ legions of protégés. “If we had a problem, we’d ask him to take a look and even in a 1 in 10 million occurrence, he’d remember seeing it and give us a detailed explanation,” said Pasternack, director of molecular pathology, in an interview with The Sun shortly after Hutchins’ death last April 27.

World-renowned in cardiac and pediatric pathology, Hutchins and his wife of 53 years, the former Loretta Bajkowski, were on an around-the-world cruise when he sustained head injuries in a fall and died at a hospital in Windhoek, Namibia. He was 77 and had remained active on the faculty.  Last year, the College of American Pathologists gave him its Lifetime Achievement Award. He also had received many teaching awards from both the Department of Pathology and the Department of Art as Applied to Medicine, where he held joint appointments.

“Grover Hutchins was truly amazing,” said Barbara Crain, an associate professor of pathology who succeeded Hutchins as head of autopsy services. “He was a medical detective who had great intellectual curiosity, which he brought to all of his cases. And because of that, he was a great inspiration, mentor, and teacher to all who knew him.”

Hutchins spent his entire career at Hopkins, not only conducting innumerable autopsies but striving to explain to bereaved families what had caused the death of their loved one, sometimes doing simple drawings on a piece of paper to clarify what he was saying.

Hutchins befriended hundreds of medical students, residents, and colleagues at Hopkins and elsewhere. Many of today’s leading academic pathologists were nurtured by collaborations with him. He published more than 500 papers covering practically every topic in his field.