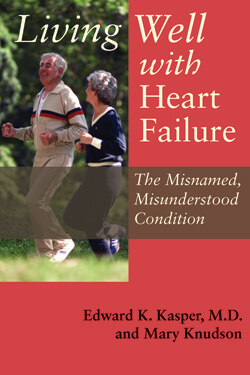 The first part of this book’s title might sound like an oxymoron: “Living Well with Heart Failure”? The second part of the title explains it: Heart failure is misnamed and misunderstood—frequently by patients; not infrequently, even by physicians.

Mary Knudson, an award-winning writer who spent 17 years covering the medicine and science beat for The Sun, was flabbergasted in 2003 when she was diagnosed with heart failure. Her symptoms of shortness of breath and fatigue seemed to come on suddenly. After seeing one doctor after another who provided what she describes as “substandard treatment,” she only grew more frightened and frustrated. None recommended the basic medications for heart failure—an ACE inhibitor or a beta blocker—apparently because she also has asthma. They evidently were unaware that many people with asthma can take a certain kind of beta blocker in moderate doses that won’t interfere with asthma medication. The third cardiologist she consulted repeatedly told her she needed a heart transplant.

Not until Knudson saw Edward Kasper, clinical director of Hopkins’ Division of Cardiology and a veteran expert in chronic heart failure and heart transplantation, did she finally receive all the medications recommended by the national guidelines, she says, and begin what has become her complete recovery.

Knudson realized that her experiences were not uncommon—and likely to occur among a growing number of Americans. Today, some 5.8 million people in the U.S. are living with heart failure, and the number surely will increase as the population ages.

Knudson and Kasper have collaborated closely on a book that will enable people to begin learning the basics of heart failure—its causes, symptoms, treatment, and challenges. Their book includes instructive case histories; advice on the patient-doctor relationship and on hospitals; additional sources of information; a chapter on exercise and another on nutrition and heart failure, written by Samantha Heller, a nutritionist who is a longtime friend of Kasper’s; and a lengthy appendix of medications.

“A well-informed patient is my best partner,” Kasper writes in the introduction. Although he and Knudson say their book aims to help patients learn as much as they can about heart failure, it can provide useful information and guidance for physicians, too.