Archives - Bringing Back the Pre-Pen

Bringing Back the Pre-Pen

When drug manufacturers stopped producing a key allergy test, Frank Adkinson and company took matters into their own hands. 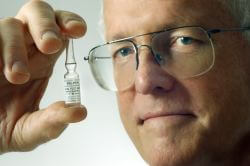 Says Adkinson: “I certainly never expected to be in the ‘orphan drug’ manufacturing business.”
photo by Keith Weller

Imagine being sick with a deadly bacterial infection and being denied the same effective, safe, and inexpensive antibiotics that the vast majority of other people can take. That’s the case for tens of millions of patients in the United States with a history of penicillin allergy. Not only must these unlucky patients avoid penicillin, but also the 40-odd other antibiotics in the same drug family—forcing them to turn to other antibiotics that are often less effective, more toxic, and much more expensive.

A saving grace for penicillin allergy patients came in the 1960s, with a skin test to determine who was truly allergic to this family of antibiotics. This new tool brought a surprising discovery: The vast majority of patients who had once experienced an allergic reaction to penicillin were no longer allergic.

“For 35 years, we’ve known that patients can lose their penicillin allergies over time. Using the skin test can remove the penicillin allergy label for 80 to 90 percent of people who were ever told that they shouldn’t take these drugs,” says L. Franklin Adkinson Jr., a professor in Allergy and Clinical Immunology at the School of Medicine.

Like most of his allergist colleagues, Adkinson had come to rely on the penicillin skin test, known as Pre-Pen, as a given for patient care and allergy studies. Then, out of the blue, the sole company that manufactured Pre-Pen in the United States pulled the product off the market. Costs for maintaining the FDA’s strict manufacturing requirements, along with a small market compared to other pharmaceuticals, made this test extremely unprofitable to manufacture. Within six months, the world’s only other manufacturer, based in Europe, came to the same decision. By 2004, all existing supplies were gone.

“The two major sources of this product worldwide just disappeared. My colleagues and I thought this was completely unacceptable, and we wanted to do something about it,” Adkinson says.

So he and a handful of other allergists—including pediatric allergist Louis Mendelson and his University of Connecticut pharmacology colleague Charlotte Ressler, as well as James Wolfe, affiliated with Stanford’s School of Medicine—got to work.

They learned that the company holding the rights to the test was willing to turn over all the information necessary to make Pre-Pen to whoever would carry the manufacturing torch. So the four researchers began by shopping around the idea to drug manufacturers already making penicillin. After more than two years of fruitless searches, they were nearly willing to throw in the towel. That’s when they dreamed up what seemed to be a pie-in-the-sky idea: Why not become Pre-Pen manufacturers themselves?

As physicians, they lacked the intimate knowledge of the complicated FDA regulatory issues that drug manufacturers need to satisfy. They also needed capital—and lots of it. So they recruited a couple of consultants: one an expert at FDA regulations, and the other an authority on building manufacturing facilities up to code. Then they scraped together money from wherever they could find it.

“We put up money from the mortgages on our houses, and we had to borrow a lot. Even though our spouses knew that this was a worthwhile venture, they thought we were all nuts,” says Adkinson.

By early 2007, the quartet had bought a small building in a business park in Plainville, Conn., and begun outfitting it with equipment. Within a couple of years, that warehouse was transformed into a sophisticated drug manufacturing facility. Their FDA application to manufacture Pre-Pen was approved on September 26, 2009, and they started production shortly afterward.

Nowadays, their facility is manufacturing Pre-Pen at full speed, and patients can once again have access to the pivotal test that can tell them whether they’ll be able to take one of the world’s most tried-and-true antibiotics.

“I certainly never expected to be in the ‘orphan drug’ manufacturing business, but now we’re able to tell patients once again with a high degree of confidence whether they’re allergic to penicillin,” says Adkinson. “It really makes a difference in their lives, and in the public’s health.  So we’re gratified, even if we never fully recover our investment.”