At last, Goldfarb is ruled inventor of key vascular graft. 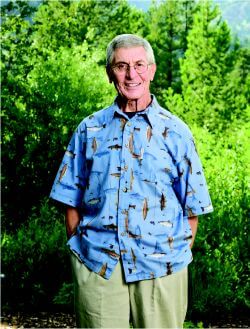 The end of an exhausting journey: Goldfarb has found satisfaction.
photo by Cameron Neilson

When David Goldfarb, A&S ’59, MD ’63, HS ’67 (PGF), was a young medical resident at Hopkins in the 1960s, he worked under mentors Henry Bahnson and Vincent Gott, observing firsthand a problem that prevented saving more lives. “Cardiovascular surgery was in its infancy,” Goldfarb recalls. “We could use veins to repair damage, but some people didn’t have good veins available. We knew we needed man-made materials that wouldn’t be rejected by the patient’s own body.”

This interest in developing artificial vascular grafts would take Goldfarb on the most satisfying—and exhausting—journey of his 40-year career.

As a cardiovascular surgeon in Arizona in the late 1960s, Goldfarb did cardiovascular surgery and oversaw a lab aimed at developing materials that could be used to repair the body’s veins, arteries, and other cardiac structures. It was this research that led to one of the longest, most complicated patent battles to be waged in the U.S. court system.

The 39-year case finally came to an end in 2009, when an Arizona federal district court judge ruled that Goldfarb was indeed the inventor of a breakthrough vascular graft that is widely used in cardiac surgery today. That proposition had been challenged in the courts for decades by the Delaware-based W.L. Gore & Associates, a company that claimed the invention as its own.

The courts ultimately decided that Goldfarb—not a Gore company employee—was the rightful inventor, and the medical device company C.R. Bard was awarded $410 million in attorneys’ fees, lost profits, and other damages. Goldfarb had licensed his invention to the company for what he calls a fair fee, in part because he could not afford the eventual $20 million in legal fees that it took to win the fight. “I am grateful that the Bard company stuck with me on this,” he says, adding, “I know this may sound trite. But I was never driven by the financial goals. I was driven by the satisfaction of knowing that I was trying to find a material that would help my patients. And I have been able to do that.”