Daniel Sulmasy is a leader in the discussion of national bioethical issues. 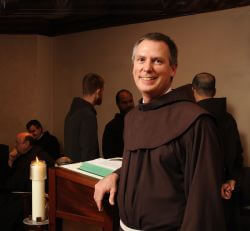 Sulmasy draws on both his medical and spiritual training to influence debate.

Daniel Sulmasy, who was recently appointed to President Barack Obama’s Bioethics Commission, experienced a religious calling long before he attended medical school at Cornell. So when Sulmasy canvassed the country interviewing for residency programs, he mentioned that he would need a two-year reprieve after his internship year for prayer and contemplation—part of his formation as a Franciscan friar. “That’s not what top-flight schools were looking for back then,” he says.

But at Hopkins, Sulmasy remembers the legendary Victor A. McKusick ’46 saying: “I’m not sure I know exactly what a Franciscan friar does, but we send residents to do research at NIH for two years, so I think we can accommodate you.” It was this attitude of acceptance, open-mindedness, and excellence, Sulmasy says, that helped chart the course for his life.

“Great institutions are marked by their willingness to take risks. And Hopkins took a risk on me. I will be forever grateful,” says Sulmasy, who went on to complete his residency, chief residency, and post-doctoral fellowship in internal medicine here.

Today a practicing physician, who also lives in community with his Franciscan brothers, Sulmasy holds the Kilbride-Clinton Chair in Medicine and Ethics at the University of Chicago and serves as associate director of the MacLean Center for Clinical Medical Ethics. He is the author of four books on bioethics and more than 140 peer-reviewed articles, and a noted scholar on some of the most soul-piercing issues in medicine today. An expert on end-of-life decision making, ethics education, and spirituality in medicine, Sulmasy grapples with issues surrounding stem cell research, physician-assisted suicide, informed consent, and surrogate decision making.

As a member of the 12-person Presidential Commission for the Study of Bioethical Issues, created in November 2009, Sulmasy joins scientists, doctors, lawyers, and even activists such as boxer Muhammad Ali’s wife (a Parkinson’s disease advocate) who now make up the inner circle advising Obama.

Sulmasy will draw on his medical and spiritual training as well as his research to influence debate. With Hopkins colleagues he has published groundbreaking studies on end-of-life decision making.

“Some physicians still consider these issues too time-consuming,” he says. “But without discussion, problems only arise down the road.”