HeadWay - Under the Robot, Back in the Classroom

Under the Robot, Back in the Classroom 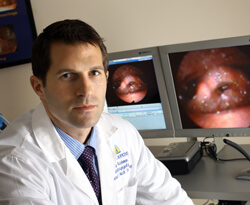 1 2 3 4
Jeremy Richmon has performed well over a hundred robot-assisted head and neck operations.

Last September, a routine physical became anything but for Esther Wong, a teacher working in the Taipei American School in Taiwan. During a full body scan, her doctor spied a concerning mass at the very base of her tongue. The tumor’s awkward placement made the subsequent biopsy a difficult one. But, eventually, Wong got her diagnosis: salivary gland cancer.

The tumor’s location would also complicate what surgical approaches were possible. Wong was told that surgeons might have to split her jawbone and possibly remove teeth to access the location. Another possible route would be through a large incision in her neck that might forever affect speech and swallowing function. Each of these methods could have an extremely detrimental impact on her teaching career, something that Wong says she was desperate to avoid.

Knowing that Wong had spent 15 years living in Maryland, the principal at her school suggested getting another opinion at Johns Hopkins. In December, Wong was back in her home state, consulting with salivary gland cancer expert David Eisele, who’s also director of the Department of Otolaryngology–Head and Neck Surgery. Because of the tumor’s location, Eisele recommended that Wong see his colleague Jeremy Richmon, an expert in robotic surgery of the head and neck.

Robotic surgery could prevent many of the drawbacks of open surgical techniques to access Wong’s tumor, Richmon explained. Rather than making large cuts on her face or neck, Richmon would use the robot’s scope and instruments to reach the tumor through Wong’s mouth, leaving no external scars. Wong also wouldn’t need a tracheotomy or feeding tube, as she might with the open techniques, and would likely be able to leave the hospital after a single night instead of a week or more.

Sold on these benefits, Wong scheduled her procedure for January 2014. The surgery was a smooth one, Richmon says, with no complications. She also underwent bilateral neck dissections to remove any at-risk lymph nodes, which was done through a cosmetically placed posterior neck incision to avoid a conspicuous scar. This showed no evidence of metastasis, so she was spared any adjuvant chemotherapy or radiation.

After spending just a single night in the hospital, Wong was discharged, and she headed back to Taiwan within weeks. She’s since had no trouble with speech or swallowing, and periodic checkups in Taiwan and at Johns Hopkins during school breaks have shown no cancer recurrence. With a clean bill of health, she was back teaching within a month of her surgery.

“I find it intensely gratifying,” Richmon says, “to offer patients an opportunity to return to their lives, work and avocations as quickly as possible.”