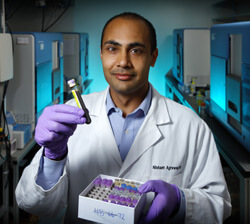 The vast majority of thyroid cancers are papillary thyroid cancers—a form of cancer that’s one of the most easily treatable and highly survivable, says Johns Hopkins head and neck surgeon Nishant Agrawal. However, about 1,200 patients each year are diagnosed with medullary thyroid cancer in the United States. Though this form is significantly rarer, Agrawal explains, it’s also much more lethal, accounting for a disproportionate number of thyroid cancer deaths.

“Medullary thyroid cancers can be much more aggressive, and they’re much more likely to metastasize to different sites,” Agrawal says. The overall 10-year survival rate is about 60 percent. But if they’ve already spread elsewhere in the body, he adds, 40 percent or fewer patients survive to the 10-year mark.

Though researchers have long known that medullary thyroid cancer has a familial component, linked to mutations in the RET gene, sporadic cases of this disease often arise that have no clear genetic cause. To better understand this cancer’s genetic underpinnings—and hopefully to eventually increase its startling long-term survival rates—Agrawal and his colleagues recently undertook a study to better understand the drivers of this disease.

Working with 17 samples from sporadic medullary thyroid cancers, all from the tumors of patients who were treated at Johns Hopkins, the researchers performed whole exome sequencing to search for additional mutations throughout the body’s protein-coding genes that might also be involved in this disease.

The results of their search, reported last year in the Journal of Clinical Endocrinology and Metabolism, turned up two other genes that appear to be important in spurring medullary thyroid cancer. Not only were RET mutations also important in these spontaneously arising cancers, but the researchers also found mutations in the RAS family of genes, specifically in the H-RAS and K-RAS genes.

Luckily, Agrawal says, both the RET and RAS pathways are targets of next-generation chemotherapeutic agents currently being tested in clinical trials for other types of deadly cancers, including pancreatic cancer. Agrawal says that the next step will be for him and his colleagues to perform functional and animal studies with some of these new therapeutics to determine whether the drugs might be effective at targeting RET and RAS pathways in medullary thyroid cancer. Eventually, he says, this work might move to patients, providing new treatment options for a disease that currently has few.

“For this cancer, which has associated morbidity and mortality related to the tumor and its treatment,” Agrawal says, “these new findings offer hope.”