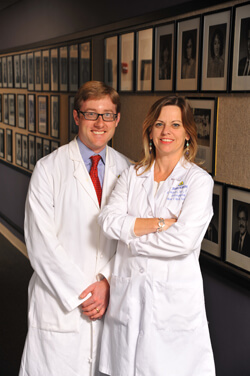 Otolaryngologist Simon Best and speech-language pathologist Kim Webster were a part of the team that made patient Tanino Gaudiano’s supracricoid laryngectomy a success.

Neither Tanino Gaudiano nor his family had noticed the subtle changes his voice was undergoing, but his dentist did. On a routine checkup several years ago, Gaudiano remembers, his dentist told him that his voice was becoming increasingly hoarse and that he should see a specialist to get to the bottom of the problem. Living in Italy at the time, he saw an otolaryngologist there and was promptly diagnosed with acid reflux, a problem easily treatable with prescription antacid.

Though that seemed to stave off progression for a while, Gaudiano noticed that his voice continued to gradually worsen. By the time he and his family moved to Bowie, Maryland, in 2012, his voice was so low and quiet that others could barely understand him.

A local otolaryngologist prescribed him higher doses of antacid and an antifungal, in case the problem was instead a yeast infection, but neither helped. A CT scan showed no obvious cause. Still searching for a solution, Gaudiano soon found himself consulting with Johns Hopkins otolaryngologist Simon Best.

Endoscopy showed a definite mass on Gaudiano’s vocal cords, but with an atypical presentation from the squamous cell carcinomas frequently found in this location. When Best conducted a biopsy in January 2013, the results were clear: Gaudiano had a T4 squamous cell carcinoma after all. “An unusual presentation of a usual cancer,” says Best—but the most advanced cancer his patient could have had.

Shocked by his diagnosis, Gaudiano and Best talked over the options. The by-the-book recommendation, said Best, was a total laryngectomy. However, the drawbacks for this procedure are substantial, leaving patients with a stoma in the neck for breathing and eradicating their natural voices.

Instead, Best had another recommendation: a supracricoid laryngectomy, which removes the vibratory vocal folds and entire thyroid cartilage but spares the cricoarytenoid joints that open and close the airway. Because a mapping biopsy showed that cancer had so far spared these critical parts of Gaudiano’s larynx, Best says, he was a good candidate for the procedure.

“Dr. Best made it clear that there were no guarantees,” Gaudiano remembers. “If it worked, then I’d have the opportunity to talk and breathe normally, but if they found they couldn’t do it during surgery, then they’d give me a full laryngectomy. It was definitely worth a try.”

When Gaudiano awoke from the five-hour procedure, he found out that the supracricoid laryngectomy was a success—but his journey was far from over. He’d need extensive follow-up care, including months of radiation to eradicate any remaining cancer cells and intensive therapy to learn how to swallow while protecting his airway.

Johns Hopkins radiation oncologist Harry Quon specifically tailored Gaudiano’s treatments for his partial laryngectomy, avoiding irradiating the joints that had been spared. Over the following weeks and months, Johns Hopkins speech-language pathologist Kim Webster implemented a personalized treatment plan to overcome the swallowing hurdles particular to this surgery, which boosts the risks of aspiration relative to a total laryngectomy because of the remaining laryngeal structures.

“Mr. Gaudiano was very motivated to relearn how to swallow so that he could eat the great Italian food that he’s so passionate about,” Webster remembers. “He loves to eat. Usually we use applesauce or other standard soft food in therapy, but he’d have none of it. He’d bring in gourmet pasta dishes and sauces that he cooked all night.”

Now 18 months out of therapy, Gaudiano can eat his favorite meals again and speaks with an altered, though preserved, voice. “It’s such a blessing that this option was available to me,” he says. “I can’t even express the appreciation I have for my whole care team at Hopkins.”