Bringing Back a Smile: Facial Reanimation 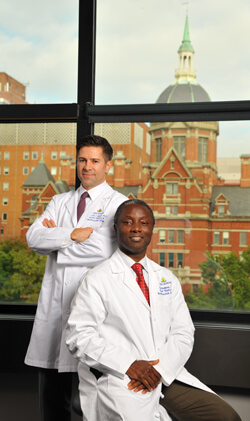 Though it’s often said that the eyes are the window to the soul, the face is equally telling. Its ability to show emotions is critical to human interactions, say Johns Hopkins facial plastic surgeons Patrick Byrne and Kofi Boahene. And, when the face becomes partially paralyzed, through tumors of the skull base or facial nerve, conditions such as Bell’s palsy or congenital defects, normal communication becomes nearly impossible.

“Facial paralysis is extraordinarily stressful,” Byrne says. “Male, female, old or young, this defect makes it almost impossible to have a normal conversation with others. Every time these patients face another person, that person is distracted and often disturbed.”

If the paralysis is recent, says Boahene, then doctors have several different and relatively simple options for facial reanimation, such as rerouting or transferring nerves to the affected area, known as reinervation. But if months or years pass without treatment, facial muscles can die, severely limiting what options are available.

“Time is muscle,” Boahene says. “Muscles of the face will start to wither away the longer the face is paralyzed.”

But all isn’t lost once reinervation isn’t possible. Two facial reanimation options exist, say the doctors, each with pros and cons that make them appealing to different patients.

The first is a called a temporalis tendon transfer, or T3, first popularized by Johns Hopkins in the early 2000s. The surgery is a modification of an older facial reanimation technique called the temporalis swing, in which muscle located at the temple is attached directly to the corner of the mouth, allowing patients to learn to smile by clinching their jaws. Though this method has a long history, it has several drawbacks, explains Byrne, including leaving a depression on the temple and a bulge on the cheek.

Instead of taking this tendon directly from the temple, the newer technique uses a more natural approach by preserving the temporalis muscle as a muscle and tendon unit. This unit is released from where it attaches to the jaw bone or coronoid and reattached at the corner of the mouth. Besides negating the temporalis swing’s drawbacks, the T3 uses a smaller incision. The entire procedure can be done in an hour on an outpatient basis, Byrne says, minimizing disruption to patients’ lives. However, it produces only a small smile.

For a more dramatic expression, patients might opt instead for a gracilis free tissue transfer. This technique involves taking a muscle from the leg and using it to replace facial muscle that’s no longer viable. While this surgery produces a more natural smile, says Boahene, it’s considerably more complicated, involving a five- to six-hour operation that necessitates extensive experience from the surgeon in microvascular and microneural repair as well as a several-day hospital stay for patients.

Both surgeons are skilled in these two techniques, offering both as options for patients. “I’ve found that in my practice, about 80 percent of patients choose the gracilis surgery, and 20 percent choose the T3,” says Boahene. “But we spend a lot of time consulting with patients to help them make this big decision.”

The one message that both surgeons want patients to know is that facial paralysis doesn’t have to be a permanent state.

“In our division,” says Byrne, “we have every cutting-edge approach to reanimating the face. We never want patients to hear that nothing can be done. In almost every situation, we can do something to help improve their facial mobility, which can improve their lives in innumerable ways.”