Striking the Right Note After Thyroidectomy 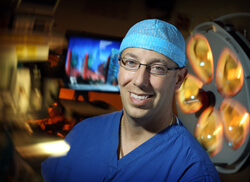 Ralph Tufano and his colleagues have particular expertise in performing thyroidectomies in singers.

Nicholle Leary has been singing professionally since she was a child, getting her first check from the Children’s Theater Company of Minneapolis when she was 12. The Los-Angeles-based performer, who goes professionally by the name Nikki Jean, has since sung under record labels including Columbia and Sony Music Entertainment.

But several years ago, a health scare threatened to ruin both her passion and her career. Heading home after receiving her first big record deal from Sony in 2008, Leary noticed a lump in her neck. An ultrasound revealed numerous nodules on her thyroid, but a fine needle biopsy showed that they were benign. Though Leary would need periodic checkups to make sure that the nodules weren’t growing, her doctors didn’t seem worried.

“Everyone kept saying that it’s not a big deal, you’ll be fine,” she says.

But Leary’s singing voice was suffering. Over the next few years, she lost more and more power and notes in her range. The experience was demoralizing and heartbreaking, she remembers.

“It’s so hard to do something professionally and passionately and feel like you’re getting worse and worse at it every day,” Leary says.

A new checkup in 2012 revealed her worst fears: Her thyroid nodules had nearly doubled in size, and new nodules had appeared. She was starting to experience compressive symptoms. Though she knew surgery had the potential to help her singing voice, it could also be the end of her career. Thyroidectomy can drastically change the voice because of this organ’s proximity to nerves that control the vocal folds. These nerves must be carefully preserved by surgeons in order to preserve normal function of the larynx.

Although most surgeons pay special attention to the recurrent laryngeal nerve (RLN), which controls abduction and adduction of the vocal folds, few surgeons worry as much about the external branch of the superior laryngeal nerve (EBSLN). If the RLN is injured, the voice can become dramatically hoarse and breathy. But if the EBSLN is injured, the voice loses pitch and power, vital qualities for singing.

Determined to save her voice, Leary searched for a surgeon with the skill and experience to preserve the EBSLN. She eventually found herself in a consult with Johns Hopkins head and neck endocrine surgeon Ralph Tufano.

“Nobody will try harder than we will to preserve those nerves that we know are incredibly important for the fine vocal qualities of singers and other professional voice users,” Tufano says.

Leary’s surgery, which took place in December 2012, wasn’t a simple one. Nodules wrapped around many of the nerves, so Tufano and his team had to proceed cautiously as they removed her thyroid. However, in the end, Leary says the procedure was a success.

“When I woke up, Dr. Tufano asked me to give him an E,” Leary remembers. “It wasn’t the best note I’d ever sung, but I knew that I still had my voice. Everything was going to be OK.”

In the months since, she’s steadily regained power and improved her range, goals she once thought would be impossible to achieve. To better understand how singers like Leary recover from thyroid surgery, Tufano and speech-language pathologist Heather Starmer have enrolled her and other singers who’ve had similar procedures into a study to examine acoustics and vocal function for months to years afterward. The results could eventually help them counsel singers on whether to have thyroid surgery and what their voices might be like in the future.

“Singers can appreciate that,” Tufano says. “When they hear we’re interested in studying this, they feel like they’ve found the right place.”