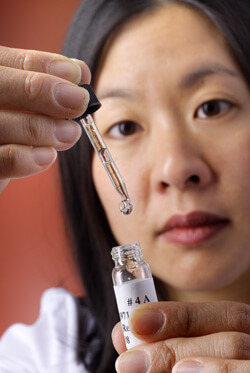 Sandra Lin and her colleagues’ research suggests that sublingual therapy can be a viable alternative to allergy shots.

Injecting patients with small amounts of purified allergens has the potential to greatly reduce their allergic symptoms, making life more bearable during allergy season. But allergy shots are literally a pain. Many patients can’t comply with receiving injections on a regular basis for up to five years, getting them once or twice a week for the first year. However, says otolaryngologist Sandra Lin, there’s an alternative that could work just as well without the drawbacks of allergy shots. She and her colleagues regularly prescribe sublingual immunotherapy, in which allergens—typically purified grasses, ragweed, dust mites, pollen and mold—are mixed into liquid drops that are then placed under patients’ tongues.

Though allergy drops aren’t yet approved by the U.S. Food and Drug Administration, they’re prescribed to some patients for off-label use, and they’ve been widely used in Europe for the past two decades. Lin uses a protocol much like those used in Europe, in which patients take allergy drops daily for three to five years. Though the duration of use is similar to that of allergy shots, patients can give themselves allergy drops at home, and the delivery is painless.

A recent review in the Journal of the American Medical Association by Lin and her colleagues shows that these drops could be a viable option for patients who are unable to comply with allergy shots.

The review, believed to be the largest of its kind, looked at previous research comparing various therapies designed to stop the wheezing, sneezing and runny nose that accompany allergic rhinoconjunctivitis and allergic asthma. Lin and other Johns Hopkins researchers analyzed 63 studies involving 5,131 participants, almost all in Europe. In eight of 13 studies, the researchers found “strong evidence” that drop therapy produced a 40 percent or greater reduction in coughing, wheezing and tightness in the chest compared with other treatments, including inhaled steroids. In nine of 36 studies comparing allergy drops to other allergy treatments, including antihistamines and nasal steroid sprays, they found that allergy drops produced a 40 percent or greater reduction in symptoms of runny nose, sneezing and nasal congestion, results which they describe as “moderate evidence” in support of using sublingual immunotherapy.

The study didn’t directly compare allergy shots with allergy drops, but Lin says previous studies suggest that their benefits may be comparable. In addition, although all types of immunotherapy come with risks, such as triggering a serious allergic reaction, she notes that allergy drops are less likely to have this effect than allergy shots.

“Our findings,” she says, “are clear evidence that sublingual immunotherapy in the form of allergy drops is an effective potential treatment option for millions of Americans suffering from allergic asthma and allergic rhinoconjunctivitis.”