A Better Solution to Difficult Airways 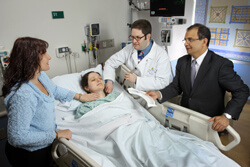 Nasir Bhatti (right) and colleagues Elliott Haut and Lauren Berkow are members of the Difficult Airway Response Team, which helps patients who can’t be easily intubated.

About eight to 10 times a week at The Johns Hopkins Hospital, the same frightening scenario plays out: A patient having trouble breathing needs an intubation, but the procedure doesn’t go smoothly. The patient has a “difficult airway,” meaning that the breathing tube won’t easily enter the throat. Time is of the essence. With every passing second, oxygen levels in the patient’s blood are declining, starving tissues of the vital molecule they need to survive.

Five years ago, doctors from four different specialties at Johns Hopkins, along with nurses, respiratory therapists and technicians, came together to form the Difficult Airway Response Team, or DART—a group established for the sole purpose of managing patients in this critical situation.

Otolaryngologist–head and neck surgeon Nasir Bhatti, who leads this team, says that before DART was established, doctors from his own specialty, or those from anesthesiology and critical care medicine, emergency medicine or surgery each handled patients found to have difficult airways, calling on colleagues from other specialties to implement their respective techniques if time lapsed without progress. But working in such defined “silos,” Bhatti says, could put patients at risk for low oxygen if an individual doctor took too long trying to make a given approach work.

In 2007, Bhatti and colleagues from each of these specialties met every week for more than a year to develop a solution. They crafted a comprehensive plan that started with doctors from each specialty, along with support staff and trainees, attending quarterly training so that members could learn a common set of techniques as well as how to work together in emergencies.

In addition, they decided that DART members would have access to the same equipment, stocked on carts placed wherever respiratory emergencies would be most likely to happen—in the emergency room, for example. Each time a cart was put together, Bhatti says, it would be reviewed with a checklist and signed so an individual could be held accountable for its contents, as in aviation or high-security scenarios.

Whenever DART members receive a page notifying them that a patient has a difficult airway, they’re committed to drop whatever they’re doing to come to the scene, Bhatti explains. There, a previously decided-upon team leader directs the procedure, unless the scenario changes. After countless hours of training at Johns Hopkins’ simulation center, DART members are prepared to change strategies as the situation changes, with a new leader being identified each time.

By definition, DART members’ work takes place in a crisis. “It is always a high-anxiety situation, no matter what, no matter how many times you train,” Bhatti says. “But we get through it as long as we can rely on our partners or wingmen.”

DART is one of Johns Hopkins’ tremendous success stories, as countless patients have been saved by the combined expertise of this team, Bhatti adds.

“It’s always extremely rewarding to save a life,” he says. “Every time we do, we’re further motivated to train the next generation of doctors, respiratory therapists, nurses and colleagues so they can continue to do the same.”