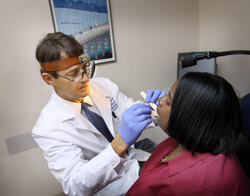 David Eisele is one of few surgeons across the country to offer sialendoscopy, a minimally invasive approach to treat salivary stones and other salivary gland conditions.

For patients with salivary gland stones, sialolithiasis, treatment options have been limited. If a surgeon can’t extract the stone transorally, the affected salivary gland must be removed—a procedure that carries significant risks, including nerve injury or scar, plus the loss of a usually functioning salivary gland.

However, explains head and neck surgeon David Eisele, an increasing therapeutic option for patients is sialendoscopy, a minimally invasive approach that allows doctors to diagnose and treat sialolithiasis and other salivary gland disorders by taking an unprecedented journey inside the ducts of salivary glands.

Developed in Europe nearly two decades ago, sialendoscopy involves using a miniaturized endoscope to delve into the submandibular and parotid salivary glands. Sialendoscopy scopes are only about a millimeter wide, allowing entry into the salivary glands without an incision to directly visualize the source of the problem.

Additionally, Eisele says, with scopes modified to include additional implements, head and neck surgeons can remove stones with wire baskets or graspers, or break them up with a YAG laser. If open surgery is indeed necessary, the scope can act as an additional way to visualize the stone from the inside and guide a directed open removal, making surgery less invasive for patients.

Eisele became one of the first in the United States to embrace sialendoscopy in 2004. He and his colleagues have contributed to the scientific literature on the topic, and he has developed the first sialendoscopy program at Johns Hopkins, which he plans to expand by training more head and neck surgeons in this new methodology. It’s all part of establishing a salivary gland center of excellence at Johns Hopkins. In the future, he adds, improvements to sialendoscopy will include more flexible scopes with enhanced optics.