Antioxidants: A Fix for Chronic Sinusitis? 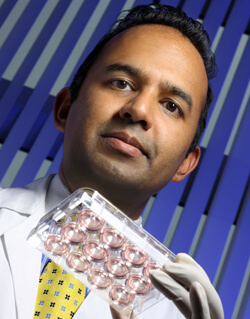 Chronic sinusitis isn’t life threatening, but for the estimated 16 percent of the U.S. population diagnosed with this condition, life is a daily struggle with impaired breathing, congestion, postnasal drip, fatigue and impaired ability to smell. Over time, these symptoms contribute to a reduced quality of life, increased time out of work and even depression in some patients.

Though it’s clear that inflammation in the sinuses and nasal passageways leads to these symptoms, says sinusitis expert Murugappan (Murray) Ramanathan, what’s unknown is this instigator’s root cause. Allergies are a common prompt, he explains, but many chronic sinusitis patients test negative for the typical allergy triggers.

However, Ramanathan’s work, for which he recently received an NIH K23 Mentored Patient-Oriented Research Career Development Award, is turning up a surprising troublemaker that could be responsible for many cases of chronic sinusitis: oxidative stress, the same cascade of reactive oxygen species blamed for a host of health problems, including heart disease, dementia and other age-related diseases.

Using a cellular model derived from nasal epithelial tissue from chronic sinusitis patients, Ramanathan is delivering doses of particulate matter—household dust from the United States and other countries. Close collaborations with colleagues at the Johns Hopkins Bloomberg School of Public Health have given him access to dust samples from all over the world, including coal-burning homes in India and Peru.

“We’re finding that cells dosed with this particulate matter mount a robust oxidative stress response,” Ramanathan says. “This response, in turn, appears to up-regulate markers of inflammation, potentially leading to the chronic sinusitis symptoms we see in some of our patients.”

Work with these cells shows that an endogenous transcription factor, NRF2, combats inflammation by scavenging free radicals. Ramanathan’s collaborators at the School of Public Health have previously shown that inducing experimental inflammation in the lungs of mice whose NRF2 gene has been knocked out produces an extremely exaggerated inflammatory response, Ramanathan says, lending further credence to the importance of this gene in combating inflammation.

Seeking a way to increase NRF2’s antioxidant action, Ramanathan and his colleagues have discovered a potential solution in earlier research performed at Johns Hopkins: a compound called sulforaphane that’s found in broccoli sprouts. Ramanathan’s recent work, in which he pretreated nasal epithelial cells with sulforaphane, showed that these cells produce lower levels of inflammation and oxidative stress when exposed to environmental pollutants.

Although it’s too early to recommend broccoli sprouts for his chronic sinusitis patients, Ramanathan says drugs that increase NRF2 production could eventually be a solution for patients whose condition resists other treatments.

“By boosting the body’s natural pathways to fight inflammation,” he says, “we may be able to offer chronic sinusitis patients better treatments in the future.”